Apparently photography is passé. That’s according to Sebastian Smee anyway, and his Image Fatigue article two weeks ago in The Australian – see Critics At A Glance III – has generated quite a few bemused reactions. According to Smee, photography is no longer special, or even art, because of its proliferation. Stephen Feneley, ex-ABC arts guy and now Crikey.com’s “arts correspondent” – was moved to write last week lamenting the great man’s gaff. Before kicking heads however, Feneley felt obliged to set up the riposte with an apology:

Before I give him a big slap, I should put on record that I think The Oz’s visual arts writer, Sebastian Smee, is one of the most engaging critics working in Australia today. He knows how to string an elegant sentence together – a depressingly rare talent in Australian art criticism – and he has a healthy disdain for artistic cant. It pains me, therefore, to see that Smee has dug himself into a hole by declaring the terminal decline of an entire area of the visual arts. In art world terms, Smee could be seen as a tad conservative, but that’s largely because he’s a ruthlessly rigorous detector of bullshit. What a pity Smee didn’t apply his usual rigour to his own bold pronouncement that “photography as an art form is on the wane” and that it’s “losing its grip on the public imagination…

The reason Smee is considered a tad conservative ‘in the art world’ is because he is a tad conservative, at least. As for rigour? Smee’s critique in Saturday’s Australian was of exhibitions of figurative painting being shown in Melbourne galleries. Smee’s gambit was to wonder, as only he can do, why no one is painting abstract paintings in the style of Mondrian and Malevich anymore. Instead of asking where this new school of figurative painting is coming from, he opts instead for the reductive historical missionary position. As our good friend Billy Bloggs remarked regarding both Smee and Feneley, they both have good points that are wrong. 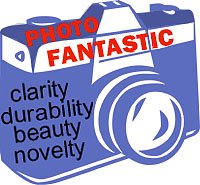 But back to photography. We were forwarded the exciting news last week that AMP Capital Investors and the City of Sydney were co-sponsoring the $10,000 Sydney Life Photography Prize:

The Sydney Life Prize will be awarded for the most outstanding work in the exhibition, as determined by a distinguished panel of judges: Sandy Edwards (Curator, Sydney Life and Curator, Stills Gallery), Alan Davies (Curator of Photographs, State Library of New South Wales) and Bec Dean (Curator, Australian Centre for Photography). The Sydney Life Prize is comprised of $5,000 cash, plus a $5,000 investment in the AMP Capital Investors Sustainable Future Australian Share Fund. The total prize value is $10,000.

Not only do you win a handy $5,000, you get a further $5,000 investment which, should you invest it wisely, could end up providing for you in your old age. The reader who sent us the news wondered who the winners of such a prestigious prize might be and we too wondered on just such a possibility, but at least in Sydney you can expect to get paid for your efforts. Not so in Melbourne where the Centre for Contemporary Photography is advertising for an “experienced photographer” to work for nothing:

CCP announces an exclusive invitation for a CCP member. We are currently seeking an experienced photographer to undertake the documentation of our exhibitions. In exchange for your time and dedication, CCP will provide an annual CCP membership, a copy of the CCP publication Photogenic: Essays/Photography/CCP 2000–2004, edited by Dr Daniel Palmer, and a limited edition CCP/Paul Knight M One11 tee-shirt. CCP will credit the photographer for use of all documentation images in CCP publications and on the CCP website. The documentation will take place 7 times a year within our four gallery spaces and projection window. CCP currently owns a very ordinary digital camera to document the CCP program, which is readily available (we give all our wonderful cameras away as prizes in the Leica/CCP Documentary Photography Award and the Kodak Salon). However if you are able to bring along your equipment we would be more than grateful. This is an excellent opportunity for a CCP Member to expand their photographic portfolio and to be involved with the preeminent Centre for Contemporary Photography. 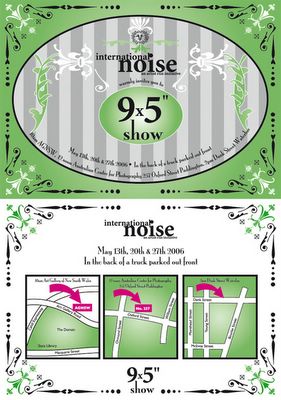 “A 9×5″ Show debuts on 13th May outside International Noise’s favourite Sydney art gallery. Following the precedent set by the First Impressionist exhibition in Australia, which challenged established perceptions of art and its presentation, we will be paying homage to the nine by five inch format. This time, International Noise is bringing art to the doorstep of the community in a white-walled, moving, high-torque, eight wheelin’, free dealin’ gallery: a truck . Details: May 13th, 20th & 27th – In the back of a truck parked out front: 10am AGNSW; 12 noon Australian Centre for Photography 257 Oxford St Paddington 2pm Dank St Waterloo.

Last week’s meeting of staff at the National Art School voted unanimously against merging with the University of NSW’s College of Fine Arts. The vote followed the news that the NAS’s preferred merger partner – Macquarie University – had but the kibosh on a multi-campus love in. Clare Morgan, writing in The Sydney Morning Herald on May 1, explained that “a spokesman for Macquarie University said it had pulled out because “the [NAS] does not sit within Macquarie’s focus on developing its research capacity”. Now, with NAS staff voting against a merger, there are very few options left to the supporters of Sydney’s “only atelier style art school”.

NAS’s problems are many. Over the years the school’s staff and management have comprehensively pissed off just about everyone who might come to their rescue. Reading Patricia Anderson’s book Art + Australia recently, we were bemused to be reminded of some of NAS’s past fights. In 1995 when the school was still part of the Technical and Further Education system, TAFE had attempted to apply a set of criteria for marking NAS students just as they might assess an apprentice mechanic. Could the students clean their brushes? Did they know how to paint a vase of flowers? Appalled, NAS management protested by saying that art was far more than just a technical skill that could be judged by luddite “standards”.

To further this case, NAS staff attacked COFA, saying that here was an example of an art school with no standards at all and if they took away NAS’s ability to mark their own students in their own special way, then the atelier model would be lost forever. The underlying contradiction of this argument is still a bit of mind bender – a fight against standardised testing to ensure technical skills was fought by claiming that without technical skills there would be no school. The upshot was that eventually, after a campaign waged with support from old warhorses John Olsen and Robert Hughes, NAS scored its own special status courtesy of funding arranged by then Premier Bob Carr. Fast forward ten years and Bob Carr leaves office and NAS without any visible means of support…

The National Art School’s current position has not changed one iota in a decade. If the chips are down, attack COFA, call on celebrity mates to help out. Unfortunately under Premier Morris Iemma and his “lover of footy and no poofter arts” policy NAS is going to have to go somewhere. NAS has its bargaining positions[s] worked out:

“These included preserving the National Art School’s identity; maintaining the school’s artistic and educational philosophy, including the Atelier model based on one-to-one instruction and mentoring; retaining existing staff; and retaining the school on its Darlinghurst site.”

Reading this we were reminded of the film Downfall and the final scenes in which General Krebbs goes to the Russians after Hitler has topped himself and offers to begin ‘negotiations’. Maybe NAS is going to try to tough it out until the last – if they’re going to go down, they may as well go down fighting. The big problem for NAS is that they do not represent the sort of investment in time, money and resources that could make it worthwhile for a University to take over the NAS in its current form. Over the last decade universities have had their funding cut to the bone and have been expected to generate their own income form various other means. In many cases this has meant a skyrocketing number of full fee paying overseas students to fill the funding gap. Another avenue has been the additional funding that universities can get from bodies such as The Australian Research Council and, in the case of the College of Fine Arts, funding from the Visual Arts Board of the Australia Council. Providing you can demonstrate that your work is new and original research into a valid area of study then you can get research grants. Unfortunately, the much vaunted atelier model does not offer this kind of opportunity and if NAS is going to merge with anyone, they can say goodbye to their list of demands.

There is one unexplored avenue left open to the NAS that we’d humbly like to suggest. What they need to find is a University without an already existing art school or visual arts component with whom they could merge. Ideally, this University should also be fiercely independent and respectful of the NAS’s unique character and traditions. It would also be handy if the University had a slightly conservative political base allowing for NAS’s own conservative, late-1960s ethos to thrive. We think we have found just such a institution.

See You On The Flip Side