It’s Not The Heat That Gets You…

It must be the humidity, it must be. There’s an air of madness around town and the frenzied gallery going reminds one of scenes from Day of The Locust, a movie about people who go mad and kill celebrities, because they’ve had enough, it’s too hot, and they’re sick of standing in queues. Last week’s openings at Blank_Space and GrantPirrie demonstrated that with the right artists, people are desperate to go out to something decent in January. Since Todd McMillan was having a solo gig at GrantPirrie people turned out en masse, partly to celebrate the excellent debut solo show from McMillan, farewell gallery assistant Clare Lewis but to also get a cold, cold beer on a hot, hot night… As things began to get more convivial we realised that people were suffering from heat stroke. There a celebrated gallerist, here a senior artist, there a rival gallerist, here that gossipy lady from the AGNSW, there the chick with the handbag … No one would go home. 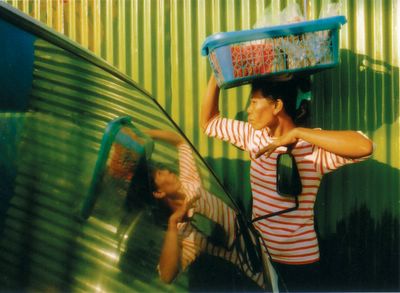 From This World by Sam Barr, opening at Spacejunk Gallery, January 27.

We thought all that sort of behaviour was just plain crazy until we heard from several people that night a story so insane it’s actually true. The popular idea is that December and January is a quiet time in the art world, but not so for the canny businessman. Case in point is Martin Browne, the art dealer and gallerist with the swanky pad in Potts Point. Back in 2003, Browne was one of four people to buy up the limited edition of Shaun Galdwell’s Storm Sequence DVD for a cool $3,500. It was a spectacular debut for Gladwell and the sell out edition was the beginning of the recent mania for video art.

Just before Xmas, Browne was approached by a collector with an offer to buy his DVD for $20,000. Sensing that there was more money to be made, Browne investigated the possibility of selling the work at auction. This move flushed out two more interested parties and a bidding war developed as a flurry of phone calls boosted the potential value of the DVD to an even cooler $50,000. After several rounds of private bidding – and flirting with the idea of putting the DVD up for sale on EBay – Browne let his Gladwell DVD go for $60,400. Sherman Galleries, meanwhile, fed the story around town claiming the final price was $65,000 and the work had been sold on Ebay – although the truth is just as spectacular, we were wondering how Gladwell feels about it. Bring on the resale royalty!

Elsewhere, the typical longueurs of January in Sydney seem to have passed more quickly than usual and there is a spate of openings and continuing exhibitions around town. The most conspicuous of course is Sculpture 2006, a multi-gallery event based in and around Danks Street with galleries staging shows by their sculptors. The line up of participating galleries includes Conny Dietzschold Gallery [Leo Erb and Willis Serber from Germany], Gallery Barry Keldoulis [Dan Templeman and Chris Fox], Brenda May Gallery [big group show] and Multiple Box [Dietzschold artist Walde Huth].

Most of the galleries in the centre will be taking part as well as ring-ins from elsewhere such as Louis Pratt showing his work in Depot Gallery courtesy of a hire by Australian Galleries getting in on the fun. The entire show opens tonight at 6pm and it’s the biggest ticket in town. If some recent openings of the last week are anything to go by, the humidity will be driving the crowd to drink and acts of madness [except Sandra Byron of course who’ll be inside her tiny gallery looking a little sad…] 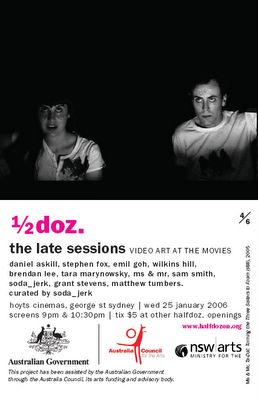 Wednesday night is a big one with openings also on at Ivan Dougherty Gallery at the College of Fine Arts of contemporary miniatures and a big show called New Indonesian Visual Art at First Draft Gallery. There’s almost too much to choose from. If you decide to go to either of these shows, you can also buy tickets to another exhibition going under the collective ½ Dozen title – a big, one night only show of video art screening at the Hoyts Cinemas at the unlovely Cinema Centre on George Street next Wednesday the 25th of January at 9pm and 10.30pm [not 7pm as incorrectly noted here last Tuesday]. Featuring work by Daniel Askill, Stephen Fox, Emil Goh, Wilkins Hill, Brendan Lee, Tara Marynowsky, Ms & Mr, Sam Smith, Soda_Jerk, Grant Stevens and Matthew Tumbers, tickets cost $5. You can also buy tickets by emailing Soda_Jerk – the curators of the video nite – at soda_jerk04[at]hotmail.com. You must buy tickets in advance, but popcorn, ice cream and other confections will be available as ever at the Candy Bar. If all that isn’t enough, across town on Thursday, Peloton is having a sculpture exhibition of its own, curated by Lisa Jones and featuring work by Jones and Metro and SMH scribe and artist Tracey Clement along with work by Louise Palmer, Sara Shera and Nicholas Folland.

For our readers not “handy to the city”, photographer Sam Barr extends an invitation to all Art Life readers to come to his This World show at Space Junk Gallery, 30 Pittwater Road, Manly, opening on January 27. “Works will be for sale, and I have made an effort to include some more affordable pieces (under $100),” says Barr. We would encourage everyone to go, but that would be the kind of brown nosing we were accused us of last year – The Art Life, the place where people meet to make friends and vigorously promote one another!