Giving a speech is a dead art. In the 19th Century when public oratory had reached its peak audiences were often expected to listen for hours to long speeches that were often delivered under dreadful conditions – in the freezing cold of a North American winter, for example, as Abraham Lincoln delivered his famous “four score and seven years ago” Gettysburg Address in 1863. But Honest Abe knew what he had to say and he kept it short, astounding his audiences with fewer than 500 words. He got up, said his piece and he was off. Perhaps this and other lessons might be applied to people giving speeches today – small things like knowing your audience – what are they interested in? How long can they comfortably listen? Is the bar still open while you’re talking?

The Art Life was told that Senator Helen Coonan is a smart woman who lacks public speaking charisma. Although her speech launching the 2006 Biennale of Sydney was lengthier than the Gettysburg Address, it was only about 5 minutes long. Do you suppose the audience of freeloading art world types with drinks in their hands could at least stand quietly and listen? Well, for a few minutes, maybe… Coonan made the mistake of assuming that the art world audience wanted to hear a bunch of poorly conceived puns and jokes and lame analogies strung together, all of it leading up to a play on the BOS title ‘zones of contact’. The Senator lost the audience within a minute of the start and as the noise in the room threatened to drown out her tiny voice, a restless hubbub spread around the room…

Now imagine you’re the Chairman of the Biennale, Luca Belgiorno-Nettis. Your guest of honour has just been rudely shunned. What do you do? You get up and tell the audience that the Federal Government has been great for the art world, or at least the Biennale – hey, how about that Myer Report everyone! – and we should all be thankful [Yell from the back of the room: “How about implementing it!”] You’d also best mention the name of the outgoing Federal Minister for the Arts Rod Kemp and hope you get a rousing cheer [which you do] and acknowledge such a cheer with the words “great to see some conservative fans in the crowd!” The Art Life has seen a lot of crazy, crazy stuff in the art world, but we’ve got to hand it to Belgiorno-Nettis – he taught us all a lesson and he did it with a smile on his face. What the art world needed to do was take a leaf from the book of Museum of Contemporary Art head lady Elizabeth Ann Macgregor who we captured in an unguarded moment during the media launch of the BOS [see video above]. Listening to BOS artistic director Dr. Charles Merewether she was a model of decorum and sensitive listening skills. That’s why she’s in charge. 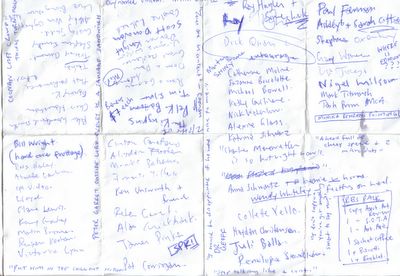 The real reason people had come to the opening of the BOS was of course to be seen and to see other people seeing them. It’s the way things work and we were more than happy to do the looking. From an ethnological point of view the art world is made up of a series of tribes. In a larger sense you might have the contemporary art crowd v the traditional art people, but within the contemporary art world there are many subsets or smaller tribes. The head of these small tribes are art dealers and thus you will find that the fabulous are surrounded by the merely talented. One art dealer after another passed our vantage point with various artists in tow looking excited and happy to be there. How does one deal with this situation if you are, for example, from out of town? You muster some local muscle and wade in. Redoubtable Melbourne gallerist Anna Schwartz proved her art world cred by walking into the MCA BOS opening with none other than Wendy Whiteley. To add to the impression of grandeur, both were wearing headgear – Whiteley going for feathers, Schwartz sporting a kind of urban hoodie thing. We spotted Sydney über dealer Martin Browne going solo without artists, surrounded by old ladies who just wanted to touch his hands. “Oh Martin!” said the old lady nearest us and we had to agree, the man looked marvellous. Barry Keldoulis looked similarly spiffy as he talked to a throng of admirers. We’re thinking Kerry Crowley may have brought a bodyguard with her but it could have been one of her artists Clinton Garafano staring down unwanted attention. We looked, we smiled, we were brutally rebuffed. Notable exceptions to the tribe leaders present were the missing Shermans, Grant Pirries and Kaliman – but just because you can’t see them doesn’t mean they don’t exist. Bill Wright was there and although he is not technically for the moment a gallery director it doesn’t mean he doesn’t have followers. They are artists, but we don’t know their names.

The BOS opening is chance for other art world luminaries who are not dealers but who wield even more influence to skulk around in the shadows with a hopeful look on their faces. Such as person was Alan Cruickshank, director of Adelaide’s Contemporary Art Centre, a man with the demeanour of someone’s best friend. He was our Ghost of Xmas Past at the BOS opening. Every time we turned around he was there. We spotted Alisdair Foster, director of the Australian Centre for Photography, wearing a mac outside the MCA and were told by someone the guards wouldn’t let him in, but that couldn’t have been true. Victoria Lynn from that Melbourne place that shows all the videos was there and we saw her laugh. There were clusters of art consultants and collectors too. Art consultant Virginia Wilson was standing next to Crikey art bloke Stephen Fennelly who was standing next to another extremely tall person. Nearby the not-so-tall but immensely powerful art collector Dick Quan was surrounded by a glamorous entourage. It made us want to skip through the crowd like a school girl on a spring day – the art life!

Yeah, yeah, but what about the artists? We saw artists by the bucket load. Ken Unsworth walked through the crowd looking like the spectre of a better art world someplace else and Imants Tillers was there wearing a jacket straight outta the 1980s. Younger hipper artists showed up too – two of The Kingpins, Monika Behrens, Caroline Rothwell, Kathy Cavaliere, Tim Silver, Grant Stephens, Del Katherine Barton, Tracey Clement, Soda_Jerk, Lisa Jones, Nigel Milson, Christopher Hanrahan, Ron and George Adams, that guy who always wears the hat, Hayden Christensen from Star Wars and James Pinker the drummer with the legendary SPK!

The thing to remember about the art world is that no matter how good it seems wherever you are, there’s always someplace better somewhere else. It’s the force that keeps everything moving. The better place at the BOS opening gala was the ‘artists party’ at Wharf 2/3 at Hickson Rd. Invitations to the MCA BOS opening were fairly easy to come by, but the special tickets for the AP were [apparently] extremely rare. Somehow we got in, so they couldn’t have been too rare, and the strange thing was that once we were in we found that there was a huge number of people standing around drinking, chatting and eating ham sandwiches. Hey someone said, the difficulty of getting a ticket was an illusion to create a sense of exclusivity and yes, we had forgotten the golden rule. We later learned that at the door – manned by tough PR ladies and security guys hired from a Central Coast leagues club – they were giving away tickets to anyone who asked. It was madness.

We wandered around the Wharf greeting friends and well wishers and admired Antony Gormley’s incredible terracotta army located upstairs. Someone gave us free drink vouchers. Servants came past with platters of food – pizza, steaks, a stuffed swan. Dancing girls draped in precious jewels pranced about getting their photos taken by paparazzi. Fashion photographer Juli Balla was wearing a furry jacket. A man in the toilets said to another bloke that he didn’t like Sydney too much because there are too many white people here. Both laughed. Ray Hughes walked in with a beautiful lady on his arm and ordered a drink at the bar like a gadfly from the ’40s. When it was suggested to us that “Charles Merewether is so hot right now” we had to agree, he is so hot right now.

We were full of love and booze and ready to make everything right in the world. Then we discovered something terrible – there was another party, a private gathering of VIPs in a separate room. The room had its own security guys and you couldn’t get in without a special coloured tag. We didn’t have a tag and we couldn’t get in. A young artist of our acquaintance was trying the old strategy of being the doorman’s mate but there was no way the hoi polloi were being let in. This is a private party, sirs, so please go away. What a fucking outrage. We wandred around in a daze and saw that the crowd was starting to thin dramatically, the DJ was playing a mash up of The Clash [Should I Stay Or Should I Go] mixed in with some oud and Paul Pena vocals. We gave away our free drink vouchers and decided it was best we go, not stay.