It’s almost as if there’s a line painted down the middle of Danks Street. On the one side there are the [mostly] good galleries, and on the other side, the [mostly] crap galleries. Deciding which side is which depends entirely on your point of view, but there is a definite demarcation for visitors with particular tastes. If one side of the line decided to get out of Danks Street, you’d either be left with a centre catering for respectable contemporary art or a bunch of shops that sell art.

The centre has been hosting an annual sculpture show wherein all the galleries – with the exception of Sandra Byron’s photography gallery – have a show of sculptures. It’s a simple enough gambit and far better than the welter of group shows that usually kick off this time of year. It attracts people to a quasi-event and gives focus to what is usually a very quick in-n-out visit. The problem, however, is that Danks Street has been having a few problems. Still South closed up when the newly refurbished Stills in Paddington reopened last year. That space is still vacant. Barry Keldoulis moved into Utopia’s larger gallery when the venerable Chris Hodges and company moved upstairs. Keldoulis’s old space is now another hire gallery [so that’s two]. Meanwhile, the demise of Gow Langsford meant that the very popular Depot restaurant could expand into half the vacated Langsford space while the rest of it was been taken over by Gabriella Roy‘s Aboriginal and Pacific Art [formerly a near neighbour of Yuill/Crowley in the Dymocks Building]. The effect of all these comings and goings has meant that a visit to Danks Street has often been a quick tour past empty spaces to the few remaining galleries still open. Sculpture 2006 therefore was a big chance for the now almost full art centre to reestablish itself and besides, we always love a big art happening…

Australian Galleries had rented out the Depot Gallery to showcase the work of one of their artists, sculptor Louis Pratt. It was quick ten day excursion across town for the gallery to get in on the Danks action. Pratt’s work was certainly ambitious, recklessly working with such unforgiving mediums as bronze and stainless steel, along with elegantly sculpted resins, modeling nightmarish miniature worlds. Sculpture is about traversing the symbolic and the schematic – setting up ideas using references to real world objects, playing with scale, materials and finishes and, like painting, can be thrillingly obscure or tediously demonstrative. Since all styles and approaches coexist these days, there’s no right or wrong, just a bewildering array of choices for artists. Do I use a real object – or do I create it? If I make a certain decision, what are the options? 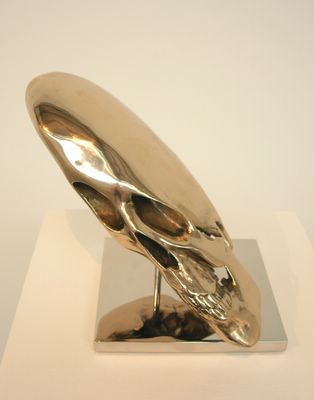 Pratt’s choice was to work with illustrative, illusionistic models that are like miniature nightmares. The Fall, for example, is a tiny bronze figure stuck to a wall that, when you looked at just the right angle, seemed to be a full scale figure falling through the void of the white wall. Other works played with similar devices. Ambassadors Skull takes the elongated skull hidden inside Holbein’s painting The Ambassadors and rendered it 3D using highly polished bronze. As you moved around the work, it seemed to warp and change until, suddenly, it morphed into what appeared to be a complete skull. It’s a neat device and one that Pratt used to varying degrees of success in other works. Some were sensational, others kind of so so. Where it worked, though, it was like having a vice squeezing your head. Pratt’s show is now closed at Danks Street, but punters can catch the works at Australian Galleries Works On Paper on Glenmore Road.

Conny Dietzschold Gallery has the work of three artist shoehorned into the space. It is quite incredible how much stuff is in CDG – along with the books, video screens and multiples works spread around and stacked up, it seems almost impossible that you could have a show in there – but somehow they do, and it’s a group show! Willi Siber and Leo Erb share the main gallery space and Walde Huth is next door in Multiple Box. Siber uses big hunks of wood that he chops and carves into rough surfaces which are then daubed with gobs of paint. The wall works – delicate patterns of shattered wood – are far too decorative to have much of an impact but his Floor Sculpture with its injury inducing spikes and sea anemone like form is much more engaging. There’s nothing particularly radical here, a rather polite abstraction that’s saved by the confident destruction of the materials. Leo Erb has just three works, acrylic and pigment on wood pieces, arrayed in the gallery and they are a perfect match to Siber – polite geometric abstractions – and they wouldn’t look out of place in a homewares store. 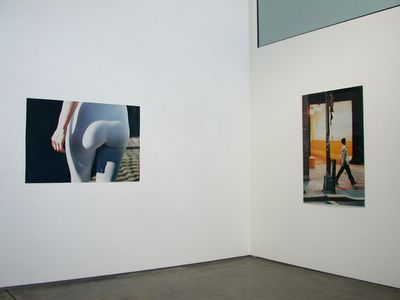 Walde Huth, The Dancer and right, The New Yorker.
90x136cms and 134x93cms. Type C prints.
Courtesy Conny Dietzschold Gallery.
Next door, Walde Huth’s sculptures are photographs. Court of The Haymen is a photograph of shafts of light on some hay stacks. The New Yorker is a bloke walking in the street. The Dancer is a woman’s arse. Unwinding is some strips of metal. You know, we were expecting a completely conceptual approach to sculpture at some point but have to admit to being surprised when we found it. Surprised and a bit saddened, if we’re telling the truth, because while we’re more than happy to look at a picture of a woman’s arse for hours and hours, we’re always keen on a context for that picture. Perhaps the context is in the choice of showing these works in among all the three dimensional objects as a little act of reminding us not to be so literal. If that’s the case, point taken… 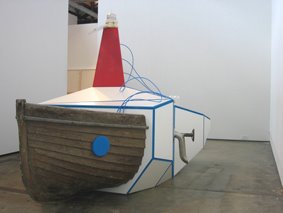 Chris Fox, Garlic Fish Man, 2005. Various materials, 210x70x70cms.
Courtesy GBK.
Gallery Barry Keldoulis has the work of two sculptors – Daniel Templeman and Chris Fox and when put together – Fox Templeman – sound like a firm of solicitors or groovy architects. Their work is about transformations, a simple and easy concept to get but like mutability itself, endlessly changing. Fox is the more eccentric of the two, using songs he’s written as the background narrative to the works [and which can be heard if you put your ear to the sculptures]. The work 1 Kilo Block Feeds The Whole Family is a sort of cooler fridge with big blue industrial hoses and an gi-normous block of cheese. Somehow the cheese acts as a metaphor for life, change being somehow involved through a character’s journey of self discovery, culture growing internally… This idea kind of works, proposing a rather startling thought for the next time you open a fridge in a supermarket. Garlic Fish Man is a little more comprehensible, literally creating transformation by modeling a boat, using a real dinghy for one half of the sculpture, the other end a sort of blue and white, boxy and schematic boat made from plastic. The great thing about this work is that it’s all there – and there’s a ringing bell. 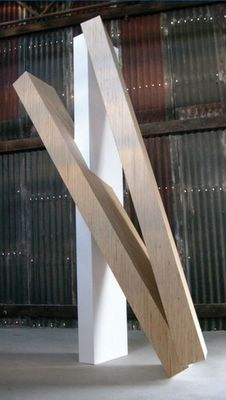 Dan Templeman, Split Second, 2005-06. MDF, plywood, 250x145x70cms.
Courtesy GBK.
Dan Templeman’s work is classically minimalist, free standing quotations of building structures, supporting beams and walls and columns, twisted to disrupt their apparent purpose. They are elegant – some might even go so far as to say swellegant – and we’d have to agree. They are very attractive items indeed, but we are troubled by the apparent disjunction between how they appear and what they are. In other words, these works are on the one hand illusionistic, yet they are also literal renderings, marooned somewhere between the real and the simulation the works uneasily suggest classic minimalism and everyday world of MDF. We think this is on purpose, and we like it.

And then we crossed over. Brenda May Gallery has a show called Sculpture 2006: Applied Arts – Form + Function – Focus on Tasmania. This is a show of knives, sterling silver brooches, lamp shades, paper weights, assorted jewellery and etc. One of the few actual works of art in this show are a couple of miniature houses made by Angela McDougall – one is Farmhouse, the other is Contemporary Villa. They’re stuck up high on the wall and look great but then we thought what is this? A center for ants? How can we be expected to teach children to learn how to read if they can’t even fit inside the building?

Next door is Stella Downer Fine Art which has a quartet of sculptors making work so middle of the road they’re in danger of being run over. They also put us in an interior decorating frame of mind. Denese Oates has some maritime and aquatic themed sculptures – big fish tails, maybe from mermaids – which would look great in a hotel lobby, or perhaps on a wall above a natural wood credenza tastefully decorated with river rocks and a portrait of your kids in a silver frame. Clara Hali, meanwhile, has made some small figures in bronze doing various keep fit moves. The works are titled Arch,Handstand, Swinger and Landslide and would look super next to a copy of Kylie Kwong’s latest recipes. Anna Eggert has made some dresses out of stainless steel mesh and to be frank, we don’t think they’d look good anywhere except perhaps inside a cupboard at the bottom of the ocean. The odd person out here is Ingrid Cerny, who has made some finicky things out of fine metal lattices. They are way too time consuming and headache inducing to look at, but they do look good.

Jimmy Rix’s show Bronzes and Beyond finished on January 28th. It was an interesting idea this “bronzes and beyond” – what could possibly be beyond bronze? Manganese? Anyway, the show was a collection of massive bronze works from the last few years, some of them actually made of bronze, others made of plastic and painted to look like bronze. Rix likes his forms chuncky, and literal too – bits of machines stuck together and given names like Battle Ark. With their dark brown patina and lugubrious construction, we thought that maybe there was a bottle of scotch hidden inside one of them and spent the last few moments of our visit to Danks Street trying to unscrew the tops from Rix’s sculptures. Sadly, the booze was only in our minds… 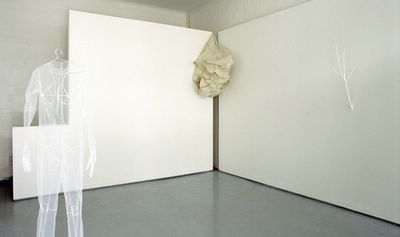 There were still a couple of things to do. Upstairs at Utopia Christopher Hodges had a show of his own sculptures. We’ve seen his work before and there it was again – a big static Curly Whirly at the door to the stairs. We thought better of it and popped over to Peloton to see an unofficial satellite show curated by Lisa Jones, an artist who shows with Conny Dietzschold. We almost threw in the towel as we left Danks Street but we’re glad we persisted – it was sprightly little show. Tracey Clement, artist and writer for The Metro, had a gossamer outline of a figure hanging from a glass coat hanger called Untitled. Although almost identical to Anna Eggert’s work in concept, in execution it couldn’t have been more different. Where Eggert’s work was heavy and obvious, Clement had made something rather miraculous. Jones’s work is a wall piece that hangs ominously from the wall like a wasp’s nest, although called Wall Mould it’s an accretion of a different variety. Louise Palmer had a stick painted white stuck to the wall. The piece of resistance, however, was Nicholas Folland’s Trophies 1-11. The trophies – crappy old tin cans with handles and bases roughly attached – were etched for very special awards – NOT HAVING A GO, MAKING IT THROUGH THE DAY and MISSING THE RACE. Sometimes this whole art game is worth it.