Day of The Locust

The Blue Mountains-based artist Locust Jones is currently producing 20 and 30 metre long artworks on continuous rolls of paper that tread the fault line between traditionaldrawing and painting – work that is both graphic but with a painterly quality achieved through the application of ink by large droppers, horse syringes and bamboo sticks. The work is populated with contemporary figures and events taken from the nightly news that represents a singularly personal response by the artist to contemporary cultural phenomena, captured with a snapshot immediacy that marks the digital age. The result is an intense dose of stream of consciousness, information overload that’s like drug-fucked channel surfing, but with a point. 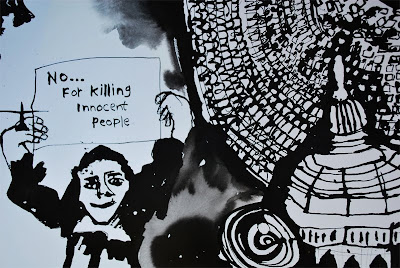 Your works have the qualities of both drawings and paintings. How do you categorise them or do you think that’s a false distinction?

Locust Jones: I think that because I use lots of ink the drawings appear quite painterly. I apply the ink with large droppers (pipettes) and syringes the ink is squeezed out and dribbled onto the paper to make a line. This line is easily blurred and corrupted depending on how hard I squeeze the dropper – that is where the distinction lies. And because I use thick French ink which I have allowed to evaporate the ink becomes more like a painterly medium.

Can you explain the process of working on 30 metre rolls of paper? It must be quite daunting.

LJ: The 30 metre drawing I am working on at present came about through first working on a 10 metre roll as a kind of cathartic process and the success of that first long drawing spurred me on to 20 metre drawings. Recently I was curated into a drawing exhibition so this became a catalyst for making a 30 metre work. I started it on the day of the Mumbai terror attacks in November/December or whenever it was and I am finishing it (4 metres left to go) with the destruction of Gaza by Israel, so it has taken approximately 2 months to make, however I completed the first 15 metres in 2 weeks. I roll out the paper 2-4 meters at a time, so it’s not so daunting – it becomes a kind of diarist process and is in some ways quite methodical. It’s like a chronology of events as they take place. 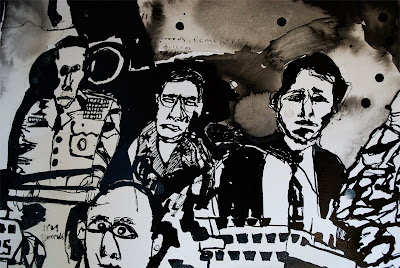 One of your recent works was inspired, as you say, by your response to the “Mumbai massacre”. Does your work generally start as a response to political events or cultural phenomena generally?

LJ: Yes, my work usually does start with a response to some media event I witness, read or watch. I also subscribe to various international journals and papers so I take a lot of what I read and see from these as well as Internet sources and some national broadsheets. 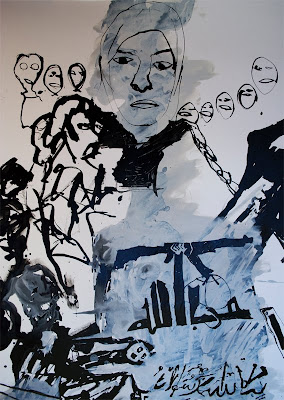 Even though the subject matter is recognisable the works seem quite personal – like you’re trying to make sense of cultural events as you go along. Is this perhaps to do with the fact that you are responding in such an immediate way to things that concern you?

LJ: Yes, that’s correct. Funny because the title for my 30 metre work is “Making sense of senselessness”, and you have just asked me this question about trying to make sense of cultural events as I go along. I tend to work straight off the bat so yes, I am responding in an immediate way to the images on the television, Internet, magazines or journals that I use as inspiration, kind of like a Mass Media Regurgitator and when an image excites or angers me or I feel quite strongly about a certain war or innocent lives lost then I will respond with a lot more aggression and violence than what I would if I were merely rendering in ink a politician or lunar space module, and a lot of my feelings and personal stuff get caught up in the process and this makes for a jumble of images and text which might appear confusing but I feel all the better for laying it out. At least it might help when people look at the work, and are reminded of the horrors of Gaza, Mumbai, Somalia, Congo, Rwanda, Zimbabwe before they are assaulted by the next wave of media hysteria.

LJ: I respond to the global political climate by rendering images and captions I read and see in ink and graphite mostly. I don’t know if that makes me a “political” artist. I do it because I am interested or repelled or disturbed by what I see. The more disturbing the image the more I want to draw it and by laying all these disturbing, sad, depressing, hopeless images down I think I am unconsciously looking for some hope in the hopelessness of what I see.