The brand new and just opened Gallery of Modern Art in Brisbane is a lovely place. It’s huge, with a sequence of stunning, high ceiling spaces, polished wood floors, natural wood features, lots of light, flat roof and paved outside areas. It’s relaxing like a Better Homes and Gardens beach house, the kind of place where Peter Beattie can invite a few Labor mates over for a barbeque on a hot Saturday arvo next to the river. The art isn’t bad either. Doug Hall’s collection policy of concentrating oncontemporary art has resulted in a destination collection the envy of many state galleries. In GoMA’s palatial spaces you’ll find work by Imants Tillers and Dale Frank next to Georg Baselitz and Sigmar Polke, Robert Macpherson and Fiona Hall next to Rachel Whiteread and Yayoi Kusama. Pieces purchased from past Asia Pacific Triennials adds considerable weight and breadth to the collection. Taskashi Murikami’s Mr. DOB character smiles out from its super flat surface, a grinning mascot for GoMA’s delirious collection of contemporary treasures. 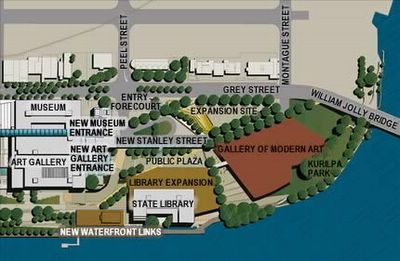 The problem for the thousands of punters who turned up for the GoMA grand opening on Friday night was to find something that was wrong with it. The fun of attending soon turned to green envy for Southerners checking out GoMA’s amazing facilities – a fully wired and set up New Media gallery, three beautiful cinemas making up the body of the gallery’s cinematheque. Taken as an idea for a gallery rendered in three dimensions, it appears to be flawless, even if the gallery’s lifts and escalators failed over the weekend as 11,000 people tramped around the building. GoMA is Queensland announcing to the rest of the country and the region that it is to be taken seriously. Part of that seriousness is Beattie’s preferred successor to Hall. In The Sun Herald last weekend William Petley – a man who looks like he was invented by Evelyn Waugh – disclosed that Beattie had flown down to Sydney to convince Elizabeth Ann Macgregor to take over. It must be a tempting offer – you could easily fit the MCA into GoMA many times over and with a State Government committed to using contemporary art as evidence of its cultural maturity, Macgregor would pretty much have a blank cheque to do whatever she likes.

They certainly know how to have a good time in Brisbane and the media preview of GoMA and APT was superbly organised. With laminates flashing and name tags akimbo, mobs of art media were given lightening-fast tours by GoMA curators. Our smiling guide was none other than Julie Ewington who took us around so fast we had to run to keep up. Qin Ga! Some Thai artist! Some English woman! Sima Urale! A Korean artist! Someone from Sydney! Kids APT! Cinemas! The media packs were light on for solid information but they did come with a bottle of water, for which we were thankful, and at the end of the tour we were given a lunch that consisted of egg sandwiches, wine, beer, juice, and delightful chocolates. Kicking off at 10.30am, it was all over by 11.45. but with another couple of hours to go you could wander around and take in the majesty of the magnificence of the general awesomeness of it all. We sat on a bench and took a breath.

We saw Katrina Schwarz from Art & Australia, Tracey Clement, the tireless art reporter for the SMH’s Metro, Susan McCulloch reporting for The Oz, Joanna Mendelssohn representing The Bulletin and Lily Hibberd from Un Magazine conscientiously taking notes. John McDonald wandered around trying to talk to people. Julie Rigg, Radio National’s film critic was also there, for no apparent reason. But actual arts journalists were in short supply as it soon became apparent that the tour was mainly for interstate and international gallery and cultural institutions staff on an all-expenses paid junket. [Staff of The Art Life paid our own way to the opening, staying at a hotel no one had ever heard of and that was packed with OAP’s in uniform shorts and long socks.] We saw Nicholas Chambers, ex-Cottier Gallery assistant, who had left Sydney to work at the Queensland Art Gallery. He looked like the cat that’d got the cream – a few years at QAG and now he’s got best curatorial gig in the country. There were curators from all over the place – Perth, Sydney, Adelaide, Darwin, Melbourne, Auckland, Dunedin, Hawaii, and Tokyo – Australia Council head Anna Waldman, Alasdair Foster from the ACP, Blair French and Reuben Keehan from Artspace, Wayne Tunnicliffe and Natasha Bullock from the AGNSW, Craig Judd from Hobart’s Art Gallery and Museum. Some woman in the company of artist Tony Twigg walked and said “I’m going to write something, but it depends on what I respond to…” We knew what she meant.

The opening at 7.30pm was of a different order completely. Chatting with Brisbane artist Gemma Smith – and there were a few artists around, official participants and innocent bystanders – we were told that the QAG doesn’t normally have openings for their shows. They just open on the first day and that’s it – no parties, no speeches and no big deal. This may be the reason why, with the opening of GoMA and APT on at the same time, a once-every-three-years fever gripped the city and the guest list for the opening was said to be in excess of 4,000 names. By 7.45pm GoMA was packed with blonde Queensland chicks on the arms of befuddled old men with snappy suits and silver grey hair – it was like the set of a big budget disaster movie. Hell upside down!

Speeches were given at the media preview so none were forthcoming on the evening. Instead, Mercury Prize winning UK DJ Talvin Singh was the cross-culturally acceptable entertainment for the night. His set started well with some thunderous drum and bass breaks before spending the next four hours drifting along into ambient wash. We kept coming back to the stage area to see if things had improved, but instead they got progressively worse. At one point, late in the night, the audience pissed up on Crown Lager [official sponsor] displayed all the worst excesses of people trying to prove their club credentials at an art event. Here is a quick sample of approaches:

2. Wave One Hand In the Air as Though Pointing – not completely committed to actually dancing, but still “with it” enough to move one’s body to “the beat”.

3. Moving Legs in Rubbery Fashion While Walking – last seen performed by Edmund Capon at the final Perspecta opening, can also be performed while eating or drinking, and looks a lot like Grouch Marx’s gait, except rhythmic.

4. Talking About The Set While Set Is On – plainly, people talking about it while it’s actually happening are either curators or have spent their entire lives at the back of rock gigs, probably both.

5. Dancing At Twice the Tempo of The Music with All Limbs Moving – performed by people in their late 50s and early 60s, they are hearing different music to the music actually being played and look as though they are being repeatedly electrocuted.

6. I Have Actually Been To A Club/Dance Party/Parklife – people who can dance and are not afraid to show it, yet dancing in an art gallery is nevertheless tragic.

The opening of GoMA mixed all of these approaches into one big crowd of drunken fools. Turning away, we tried to replay Aquasky’s Red Out in our heads to erase to horribleness, yet we couldn’t. We decided to set out and tour the halls and galleries, see all the people and record the names, drink plenty more beer and have fun. It became an impossible task very quickly as so many people were there, so many art world celebrities wandering about. Should we record that Jon Cattapan was looking happy that one of his fine paintings was in the inaugural hang? Or that Anna Schwartz used the opening to wear an architecturally inspired creation in fabric decorated with the family tartan? Or should we say we saw a man with one very small eye and one very large eye, like a famous monster of movie land? Let us simply say this – everyone was there…

GoMA is an incredible creation, born in part from a deep seated cultural insecurity and in part from the result of forward thinking political triumphalism. Had Beattie lost the last state election it would have created an unprecedented situation where a Liberal government opened what was a Labor party sponsored cultural initiative. Normally it’s the other way around. In a state enjoying the cream from the resources boom and a lion’s share of GST revenue, untold riches of the sort alien to Sydney can be spent on museums and galleries. GoMA doesn’t appear to have much of a meaningful relationship with the Brisbane art scene. That may come in time but what one can’t deny is that GoMA is massively out of scale with Queensland’s art community.

People in Brisbane like to call their city Briz-Vegas and we’ve never really understood it. Our visits there have always given the impression of a rollicking Wild West town with people falling out of saloon doors, a guy being bashed at the bus stop as someone rides the bonnet of a car down Edward Street. This time it all became clear. GoMA is a lot like a casino in Las Vegas – an out of the way tourist destination like the Bellagio – with an incredible collection of art that has as much to do with the rest of the Australian art world as a casino has to do with international monetary markets. It’s a nice place to visit and when you’re next there, see if you can fit it in between Warner Bros. Movie World and Sea World.