Having arrived in Australia from Europe we book our accommodation online. Wotif.com finds us in a hotel in Kent Street Sydney. As with many of Sydney’s boutique hotels the foyer is dominated by a large decorative Australian artwork, Cadence #3, a tapestry by Robert Owen.

During our week in the harbourside city the news informs us that the global economy has fallen off a cliff, caused by what has become known as the international credit crunch. In a dramatic move the Australian Prime Minister announces an economic stimulus package that will use the billions of dollars of budget surplus to pump prime the local economy. It is an attempt to avoid the international financial tsunami engulfing the local economy. This destructive wave is the signal that a global recession is on the way. However what good might come out of such an event? For recessions are obviously painful for many, including artists, but also opportunities for fundamental structural evolution in society. 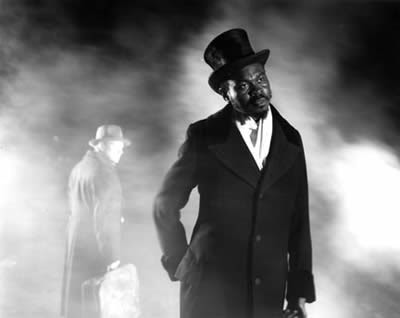 Yinka Shonibare MBE, Dorian Gray.
As the world’s stock markets go into meltdown we head down the road to the Museum of Contemporary Art. Two exhibitions are on show. The first is Primavera, a survey of young Australian artists. When quizzed, a well-informed attendant tells us that the name is from the Italian meaning spring and is an annual exhibition. I ask how many Australian’s speak Italian and she informs me that Primavera is also the title of a Botticelli painting.

Upstairs is Yinka Shonibare M.B.E. Shonibare is a British born artist with a Nigerian background. He is probably just about as British establishment as any artist can be. He has the Medal of the British Empire (M.B.E.) to prove it. According to the catalogue. “He accepted the award with relish…” although it is noted elsewhere that the use of the title by the artist is “…an ironic dig at the British Honours system.”

Emphasizing his established reputation the Tate has collected his work. Originally the Tate was set up to collect and promote British Art and has now evolved to contextualize British art alongside international Art through the Tate Modern. It does it extremely successfully. Interestingly, the Tate is named after a benefactor whose sugar coated fortune was made using slave labour in the most brutal of fashion so its history with black artists is complex. Shonibare shares some of this history having descended from a nineteenth-century Yoruba King who was also a slave owner.

As I struggle to understand how irony can be coated with relish we read of Shonibare’s importance. This is based on his use of wax fabrics that are strongly identified with Africa. Shonibare realized that they are actually designed and made in Europe and were sent to Africa because the Dutch exporters could not sell the fabric into Indonesia, their intended market. Instead they sold the material into western Africa where it became popular, particularly during the fifties and sixties, when many African states were gaining independence. Apparently people decided to wear this material instead of obvious western clothes as a sign of African liberation, which is how the material paradoxically came to be identified as African. It is an odd piece of history and the exhibition to my eye is the visual merchandising of it, utilizing repetitive window display techniques, including headless mannequins. The exception to this are the paintings, which are painted on the material in an awkward and clumsy manner and do not share the slickness of the ‘video’ piece or the photography where ,unlike the mannequins, everybody keeps their head.

The catalogue twice repeats that Shonibare’s work is a link “to the tangled interrelationships between Africa and Europe.” This may well be true – but what makes this exhibition truly intriguing is not the work but that the exhibition has originated from within an Australian art institution and afterwards will travel to the Brooklyn Museum and the National Museum of African Art in the US. As I understand it, an Australian art institution has imported a British establishment artist, value adding further international credibility and scholarship to his work and is then exporting his exhibition to America where he has already exhibited and been written about extensively. Robert Hobbs states in Yinka Shonibare, [p.25] that Shonibare has had 108 group shows and 33 solo museum and gallery exhibitions. He has featured on the covers of Art and America, Artforum, Art News, Sculpture, as well as “an elaborate New York Times Style magazine spread.” It raises this question. Is the MCA mimicking the role of a colonial Dutch company in importing European art into a local market only to then export it to a third country? 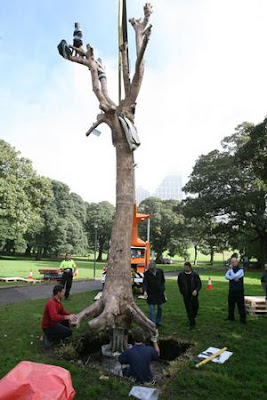 Sticking it in…
Installing Giuseppe Penone’s bronze tree for the Biennale of Sydney.
After the MCA we head off to the Art Gallery of New South Wales where we find two enormously large Kiefer paintings dominating the galleries. They are powerful works, however, having been placed in a Eurocentric mood, I ask what is the relevance of post-war German angst to this collection and Sydney in general? Is the AGNSW, like Tate Modern, attempting to contextualize Australian art by juxtaposing it against the international? Or is it grandiose European trophy art that is being used to negate the complexity of the regional?

We move on to admire more European war angst in Otto Dix’s etchings and then for some Asian regional respite the Lost Buddha’s. However we avoid the Monet exhibition and the obligatory shop and instead go down to the basement where contemporary Aboriginal art is symbolically segregated. This seems to answer my earlier question – the AGNSW is no Tate Modern although its relationship with black artists is obviously just as complex and unresolved.

On the way back up we stop for lunch at the gallery’s splendid restaurant, which we regard as a great deal better than Tate Modern’s. I decide on the snapper and Christina has the pork chop. When the meals arrive our conversation is animated and the waitress wrongly presumes I am getting the chop and Christina the fish. Our conversation centres on a rock up a tree in the gardens opposite the gallery, which we encountered on our arrival. It is curiously placed and I am unsure whether it is part of the gallery collection. We approached the information desk where I asked the receptionist the name of the artist who had created the rock in the tree and the date of when it was made. “It is by an Italian artist who was involved in Arte Povera” she replied. “It was part of the Sydney Biennale and we are trying to raise the money to buy it.” I put on a straight face and ask; “Do you think the Italian artist might have been influenced by the Australian artist John Kelly and his ‘Cow up a tree’?” She laughs dismissively and informs me that; “Oh no I don’t think they look this way!” “Oh”, I reply, “John Kelly exhibited that work in Europe on the Champs Elysee back in 1999 – maybe he saw it over there?” “Oh no it is from the 40’s or 50’s” she continues. “Are you sure?” I enquire. Helpfully she rings the curator for the artist’s name and – upon being informed that the artist is Giuseppe Penone – we look up the catalogue and find the work was completed in 2007. Penone’s work often deals with the image of the tree and has done so for a considerable time. However there are some obvious similarities with Cow up a tree. Both quote previous artists work heavily influenced by events in WWII, both use bronze, are 8 metres in height and both are realistic looking trees with an object stuck in the fork of the branches. At the very least a visual dialogue seems to exist. In 1999 ‘Cow up a tree’ received widespread coverage in the European press during Champs de la Sculpture. 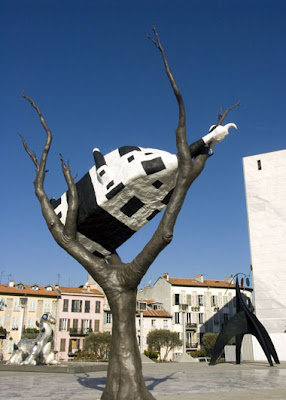 John Kelly, Cow Up A Tree. 1999.
Penone’s piece is obviously quoting Joseph Beuys work in Kassell, Germany (during Documenta 7) where Beuys wanted to plant thousands of Oak trees and place a basalt rock next to each one. It forms an obvious connection with Kiefer who was also heavily influenced by Joseph Beuys. Beuys and Kiefer “share a concern with German trauma in the wake of the Second World War.” As I look out the restaurant window, over the gardens to where the Japanese attacked the USS Chicago in Sydney Harbour I again ponder why German angst dominates the AGNSW and can only think it is a transference from our own colonial past that resides in the basement of our minds.

Well before WWII, Cezanne also painted trees and during our short stay in Sydney we learn that the AGNSW is currently on another fund raising adventure tapping up generous donors to buy a ‘new’ Cezanne. I would have though all the best Cezanne’s were now in museums but apparently not. The price, over sixteen million Australian dollars!

Recessions are interesting times and it is when the unthinkable can be thought and structural evolution is possible. So it might be time for Australia to take its cultural cringe to a new level and think about post-war Europe as a model in the way our art institutions are organised? For ‘wotif’ we created a type of ‘European Union’ of State and regional galleries with the National Gallery of Australia (NGA) acting as the cultural equivalent of ‘our’ Brussels. The state and Territorial galleries would then form the member states of this Union. This institution could even have a rotating Presidency to further mimic the EU!

Our Brussels, the NGA, would take care of foreign policy when it comes to collecting internationally lifting the burden from the State and Territorial galleries. This would allow them to promote and exhibit their state and territorial interests within the context of a broader Australian art history whilst the NGA would be charged with contextualizing the national against the international across Australia.

Why should we do this? Well, think how ludicrous it is that at the start of a deep global recession the AGNSW is spending over sixteen million dollars on a Cezanne when the NGA and the NGV already have two paintings by this artist and the NGV’s is currently in storage! It is appropriately titled An uphill road. If you are anti continental Europe and prefer a British model, think of this new institution as being like the Tate Modern with the other seven-state and territorial galleries playing the role of satellite institutions just as Tate Britain, Tate Liverpool and Tate St Ives do.

This unified institution would become a powerful and important player internationally. Australia’s combined resources would truly become a first class collection of international Art that each gallery struggles to achieve individually. The singular union of cultural institutions would then be in a position to place Australian art within a broader international context just as the Tate Modern does with British art.

Using this ‘European’ model, the AGNSW can exhibit a Cezanne without spending a penny – sorry a cent and that is not a euro cent! For the Art, just like Europeans would be able to freely travel between the members of the union. Then wotif the sixteen million Cezanne dollars was spent on Australian art in NSW? It might even be recession busting and then it wouldn’t matter whether the MCA mimicked Dutch colonial practice or not.