Justine Varga‘s first exhibition, 2005’s Placements featured surreal photographic vignettes created from pieces of string, toy animals and other odds and ends. The resulting images were exquisite, delicate, beautiful landscapes of an inner world that referenced both abstract ideals of pure composition as well moments of whimsy and nostalgia. I was particularly fond of the quality of the prints themselves, the photographs are large format and the resulting prints have a milky opalescent quality that is reminiscent of the lustre of thinly applied oil paint. Indeed all of the work seemed to suggest that Justine has more of a painter’s sensibility than that of a photographer.

Her 2007 collection Outside continued this theme, though with an interesting development. Taking that very particular Australian obsession with the landscape, a form that has attracted both photographers and painters, she created a collection of works that were at once a playful meditation on the nature of her medium as well as being a curious cultural portrait. The central motif appears to be Australia’s “empty heart” the land of Voss, the interior sea, the red heart. The Australia that obsesses Australians though most have never seen it. But rather than photograph the dry, dusty interior herself, she has recreated it, in her studio, (hence the title) with playful interventions and the remarkable tonality of her photography. This series of works are double exposures, the thin nacreous quality of each exposure, blending gently into the next, producing an effect not dissimilar to the white glare haze of an Australian summer. One of the more allusive pieces consisted of a handful of red soil thrown onto the concrete floor of the studio. The immediacy of the staging, coupled with the opalescent light of the work creates a poetic reference to “the interior” that is at once humorous, yet redolent of the haunting quality these ideas have in the national consciousness. It appears at once critical, in its humorous conceit, the whole mythic notion being reduced to a handful of dirt on a garage floor, yet there is a play of light and color that brings a poetic immediacy to the idea. Australia’s spiritual heart is rendered completely with nothing but a few sheets of plastic, some dirt and an odd yellow gew gaw.

It is often suggested that it is this “fear” of the interior that makes Australian’s such great travelers. That they much prefer to look outward than to an empty heart. Justine’s work may well be referencing such concern’s with the use of a model of a Qantas jumbo. This motif appears regularly, in playful asides, the flash of red serving to structure the compositions in figure ground relationships, as well as alluding to an Australia that is literaly “passed over” by Australians as they travel to “more exciting” locales. Perhaps the “outside” of the title. Again, the playfulness is refreshing, but anchored deeply in a more serious contemplation of identity and geography. 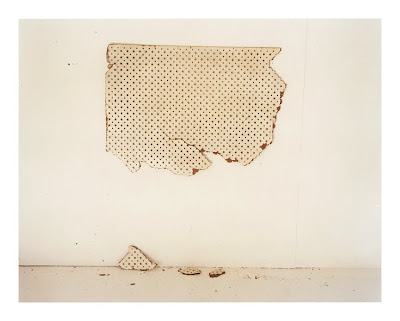 But what I find most satisfying about this work, is their deep painterliness. This is not the coy, artful, recreation of painterly techniques within another medium, but rather a deep sensitivity to the power of composition and her relationship to the studio as an expressive device. In this regard, it is not, the camera that is the tool of expression, but rather the process of creating the vignette that is photographed. Each element is considered, their placement, “just so.” The result is akin to the composition of abstract painters looking for the ideal of the sublime. A perfectly structured beauty that is satisfying in and of itself.

This deep consideration is also given to the surface of the print. She maintains a consistency of expression in her light and palette that gives the works a continuity that resonates in the viewer with the ideals of the painterly. This is not photography that captures a “moment” or is in some sense a trick for the eye. It explores a deep vein in aesthetic experience, of the things that have structured our apprehension of the art object for centuries. That they are pursued so faithfully and with such minimal means in a photographic medium may strike us as unusual at first, but upon deeper reflection, it seems an ideal means of achieving these results.

Which brings us to her last show, Empty Studio. This series is avowedly minimal, preserving the palette that has been her signature, with photographs, (though it seems ridiculous to give them such a mundane name), of a variety of elements to create works that are deeply abstract with the occasional arrangement of figurines and props,that seem to act as commentary on the nature of the process.

A favorite of mine, is nothing more than a crumbling piece of perforated white masonry stuck against a milky wall, its ragged edges, like brushstrokes. A similar pieces conspires to create a flat surface of a wall and a floor, through the mysterious figure of a thread arranged in rectangular form. These are masterful works, filled with a sublime beauty (as unfashionable as that word may be) that seeks to do that thing which art does best, answering a question, with a question, albeit poetically phrased.