Pinning down the meaning of Stuart Bailey’s recent video performance is like trying to feed an oyster into a parking meter. That’s probably to be expected in a work like Desert Mouth which depicts the artist wandering around in circles in the Californian desert without his pants – or his mind by the looks of things.

The scene is one that conjures up the type of forgetfulness that drugs induce, reinforced by the references to marijuana in his accompanying sculptural pieces. But Bailey rejects the idea that the meaning of the work is literally associated with the altered states brought about by drug use. So what’s the motivation behind his Lynch-like, pants-off escapade?

The video and accompanying sculptures seem to be concerned with the alternative states of being brought about by drug use. Certainly, you don’t seem to be thinking about much out there in the desert except perhaps “Where are my pants?” What’s the conceptual point of ‘Desert Mouth’?

Stuart Bailey: I’m not actually interested in alternative states of being. I approve of the the idea that the role of drugs in creative pursuits is pretty bogus. What I’m really interested in doing is using the cliches surrounding the use of pot to explore other ideas. I try to use popular notions about pot use such as forgetting, paranoia, thirst and a disconnection from the realities of life, to discuss the broader implications of this kind of disconnection. I see this as willful and something that suits the individual who decides to use / be disconnected. 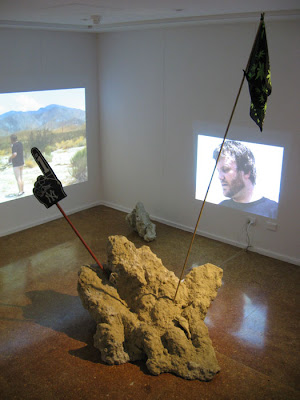 When you say you’re concerned with“the broader implications of this kind of disconnection” are you talking about a more general level of disconnect members of late-capitalist society have to the political reality they’re immersed in (but often conveniently ignore)? A type of collective cultural forgetfulness?

SB: But it’s not solely this political disconnection I’m looking at. I’m also interested in the kind of empty bravado that seems so common. Things like the hollowness of the low-level nationalism that is so popular in Australia or the recently damaged belief in the promise of unchecked capitalism. They’re all a kind of delusion bought on by a narrow focus.

Jasmin Stephens said of your work that ‘Stuart has evolved a stylish, protest vocabulary’. Can you explain how this operates in an obscure work like ‘Desert Mouth’?

SB: In the Desert Mouth installation there is a fair amount of flag waving and claim-staking, in the sculptural element particularly. Having said that I try to avoid having specific political or social issues referenced directly in my work these days. I think it can end up limiting possible readings of the work and also tends to date it. I’m more interested in getting to the anxiety associated with this quickly shifting ground we’re presented with and how people respond and attempt to control things. In one way Desert Mouth tries to talk about how exposed and vulnerable we can be.

So do you think art can take a political and ethical stance against the scourge of rampant capitalism – to rouse us from our “delusional” state – or is it always already just another commodity amidst a sea of mindless consumption?

SB: Art can try, and I guess you could say I’d like to think it does make a difference. On the flipside of this I feel that contemporary art’s small audience doesn’t make it the best medium to try and influence people on a vast scale. It would be better to make a movie, start a political group or even write a song.