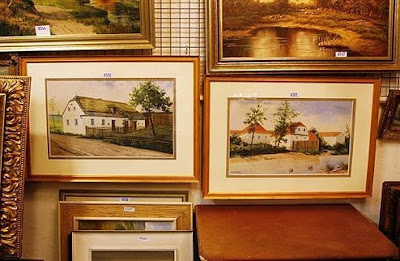 The two paintings entitled “Farmstead” (left) and “Farm Buildings On The River” by Adolf Hitler.

“Three signed watercolours by Adolf Hitler are to be sold at auction next month in Nuremberg in southern Germany, scene of the Nazi war crimes trials, a local paper said on Thursday. The paintings from 1910 and 1911 are entitled “Zerschossene Muehle” (“Bullet-riddled Mill”), “Weissenkirchen in der Wachau” — the Austrian town depicted — and “Haus mit Bruecke am Fluss” (“House With A Bridge Over A River”), the Nuernberger Nachrichten said.

According to the catalogue of the Weidler auction house, bidding will start at 3,000 euros (4,270 dollars) when the paintings go under the hammer on September 5. In April, the same auction house sold two watercolours signed by the Nazi dictator to a private collector for 32,000 euros but some works have fetched much higher sums.

As a young man, Hitler had pretensions as an artist, applying to the Vienna Academy of Fine Arts. However, he failed to gain a place at the academy and was told his drawings showed a lack of talent. He was advised to study architecture instead but refused to shelve his artistic ambitions, making money in his 20s by copying scenes from postcards and selling the results to tourists.