No sooner had we posted the item below about the winners of the Samstag and wondered if Claire Healy and Sean Cordeiro would have to share an award, Ross Wolfe, head guy at the scholarship, wrote in:

Dear Art Life, Just to clarify the question you ask – Claire Healy and Sean Cordeiro EACH receive a Samstag. We don’t have the facility to award ‘shared’ scholarships, so they are one (I mean two) lucky, but very deserving people.

If we had $80,000, we’d be investing the money in low interest earning debentures to minimize our tax burden in the current financial year [but avoiding a bigger slug in the next by cashing out late in the financial year [2006-2007] into something sturdy, like taxi plates or wine or pork bellies], not blowing it on overseas trips… But that’s just us.

Speaking of clarifications, Miss Hannah Furmage has sent off a furious email correcting our mistakes from last week:

Dear Artlife, In response to your recent post, my latest work The Fighting Song is not a “staged punch up” at the opening of another artist’s show as you wrote. The show is a one night performance in collaboration with two professional boxers who train at the Mundine Gym in Redfern. The fighters will go head-to-head in a genuine bout in a ring installed in the gallery. They will both be fitted with customised wireless flex sensors that convert their movements into sound (created by Wade ‘The Wizard’ Marynowsky). Essentially, the fighters will create a random soundtrack through the gestures of the fight.

Sadly the show was cancelled a week before the opening, it seems GrantPirrie do not like to mix their Bollinger with their Blood Sports and would prefer their aboriginal pieces framed on walls not in organised brawls. We are currently looking for a new platform for it. Do you by chance happen to know any art gallery owners secretly aspiring to be Don King? As for the Smack imbroglio, I can hook up our darling Artlife correspondents with the substance used in the exhibition, so as to ‘fix’ this tedious debate for good.

We have been building up a nice line in web site links to sites by Australian artists. Perhaps sensing we are missing out on some good links to sites by established artists, Nigel Milsom sent in the following:

“What do you see as your major influences?

The Canal Zone. Peach Street in Braintree, Mass. Zorro. Carving the word ‘shit’ on my desk in fifth grade. Getting to know how to make it come out of my cock in sixth grade. Steve McQueen and the two cars in the movie Bullitt. Watching Lee Harvey Oswald get shot on TV. The Vietnam war. Martin Luther King’s assassination. Jackson Pollock. Lenny Bruce. Jimmy Piersol (he played baseball for the Boston Red Sox and he was mentally unstable). Touching the Berlin Wall in 1968. Rod Sterling. Hugh Hefner. What’s My Line? Truth or Consequences. Who Do You Trust? The Ed Sullivan Show (all TV shows). Milton Bradley. Christian Metz. Lew Welch (a poet). Two Lane Blacktop (a movie). Woodstock. Procol Harum. Blonde on Blonde. Beach combing in Weymouth, Mass, when I was a teenager. West Side Story- especially the outfit Bernardo wore to the YMCA dance. The INs and OUTs of the New York Social Register. The fragrance counter at Sak’s Fifth Avenue. Carol Shelby. The shininess of the Velvet Underground. The Beach Boys’. In My Room. The World of Video. Tons more. Tons.”

Richard Prince in interview, Like a Beautiful Scar On Your Head, Modern Painters, Special American Issue, Autumn 2002, Vol. 15, No 3

This exhibition is accompanied by the publication of Richard Prince’s new
artist’s book, Hippie Drawings.

While we were in the UK we were shown us a copy of Frieze Issue 1. In it was an interview with Richard Prince by J.G. Ballard. In the interview, Prince claims that he was born in 1949 in Panama City, Panama and relates the story how he became a stateless person adrift on commercial airliners for three weeks as immigration authorities decided which country he belonged to. The above list of influences doesn’t seem to jibe well with this alleged biography… A mystery. If anyone would like to suggest any other good web sites by international artists, then place them in the comments below.

Last week we remarked on what we thought was an apparent similarity between the recent work of Margarita Georgiadis and McLean Edwards. We thought it was probably just a coincidence since the artists work in similar ways, but we were still wondering. We then received the following from Ms.Georgiadis:

Good call, we thought and then wondered, since Georgiadis had written to us, we may as well go to the source and ask her ourselves: could she explain the similarity in the work? Was it just a coincidence or some sort of actual tribute?

OZ-Moses……Some have hailed Picasso as an arsehole, probably because he “toyed” with the contemporary zeitgeist and turned other artist’s iconography into scrambled eggs. Or, Pablo Picasso was never called an arsehole….err, um, you know, same song – whatever. Ok, ok, I’ve scrambled my own eggs 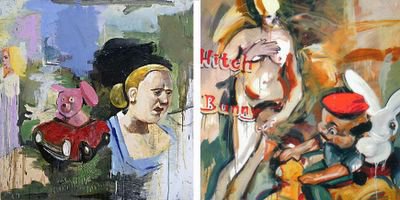 We’re more than willing to concede that we got it wrong, so we offered Georgiadis the opportunity to set the record straight. It seems at first glance that the work was incredibly similar to Edwards’s – the examples we cited – but she seemed to be saying that her intention was to take elements from his work that she liked and put them into the context of her work. Was that right? And if it was, then what was her intention in doing so? She wrote back:

Thanx for offering me the opportunity to get this rather warped record straight, jokes and puns aside.

I never intended to take any elements, style or subject matter from Edwards work and claim it as my own – I never have! I also did not intend to manipulate perceptions of his oeuvre and make a personal or socio-political statement pertaining to art about art within my current body of work. The fact of the matter is that I have been painting in this “collaged” manner ever since I began exhibiting as a professional artist almost 16 years ago. My first major solo exhibition RAW SEX BOX at Arthouse Gallery in 2000, was a body of work dealing with Australian social politics and identity. I had at this time, never even seen Edwards work, and many back then could have suggested that our concerns were similar; however, never the same.

What does fascinate and frustrate me as an artist however, is how artists somehow manage to lay claim over particular iconography. If for example if I decided to utilise images of children at play in a painting in order to make a statement, I would find myself thinking twice before doing so; the echo in the back of my mind would ring something like this: “Oh, that’s getting a bit Bromley!” An extreme example of this can be found again at Maree Mizon Gallery this month, with the current show of Jonny Niesche‘s work. At the same gallery in 2002, I had an exhibition called “IMPOSTER (Belle Ame)” within which I utilised images of myself wielding guns and wearing boxing gloves – my intention, to dress myself up as an American at war with her own reflection. Now if you take a gander at Niesche’s current line up of pornographic postulations, you will find his paintings contain women with guns and boxing gloves. Niesche’s mind set is vastly different from mine, his hovers somewhere below his waist; however, the iconography is still the same. In a review by Jennifer Sexton in The Weekend Australian 2001, titled “She who must be displayed”, one of my paintings “Fighting Femme Packs a Punch” is published, which is an image of a girl in a bikini wearing boxing gloves, with blood dripping from her crotch…..she looks mean, her gaze never meets the viewer. It’s a sexy image, but it’s also disturbing. Now, should I be spreading a scathing word around about Niesche stealing my iconography, stealing my style, dancing around my turf? I don’t think so. We are two completely different artists who just happen to be turned on by boxing gloves, guns and women in bikini’s for completely different reasons.

So to conclude, I believe that Edwards and I also happen to be turned on by similar iconography from time to time, for completely different reasons. When we think about it, the world and in particular, the Australian Art world, is a very small place; the only new things that come into being are ideas, or are they? Australian art has a very brief history, one that has unashamedly borrowed ideas, styles and subject matter from art around the globe; the simple fact that Australian art may be repeating “itself”, could be one worth investigating – and that’s your job isn’t it? Has anybody taken our New Wave of abstract artists to task for appropriating aboriginal art? Or is that just part of being Australian, a continuation of the rape of a race of people – now that’s serious.

Me And You Movie Tickets

An Elephant Is A Horse