It’s little more than a truism to say that Sam Leach’s exquisitely rendered paintings of animals are beautiful. But they’re more than simply beautiful representations of nature – they’re also allusions to what such representations suggest about our own natures.

Leach’s work is, among other things, a meditation on the complex ways we are implicated in the natural world and the way we construct ourselves in relation to it It reveals the paradoxical relationship we have to nature itself: our respect for it and desire to preserve it is suggested by Leach’s careful attention to his subject matter, yet this is intrinsically wedded to the destructive ways we intervene in it – the use of animals for decoration and display for example.

For an artist who trades in contemporary ideas but does so through an obsessive technique that historically references the 17th Century Dutch tradition, Leach’s work escapes the conventional criticism by conservative art critics in the mainstream media and the art museum going public that contemporary art is “deliberately ugly” as Christopher Allen recently accused Adam Cullen of being with his entry in the Blake Prize for Religious Art.

Leach’s work is undeniably beautiful, but does that mean people miss the darker conceptual elements at play in the work? This could be particularly true of this artist’s pictures as they are such tiny, darkly lacquered objects that you have to look very carefully to see the contemporary allegorical twist in the subject matter – the soulless, airless corporate interiors the animals inhabit – what the artist has called “spiritual vacuums”. Moreover, the beauty of the works can blind the viewer to the fact that the beautifully crafted animals are actually dead – most likely the result of human intervention. 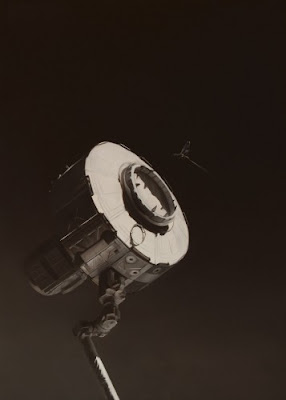 It’s a pretty uncontroversial fact that you’re paintings are beautiful in the traditional sense. So what’s your opinion on conservatives in the media and the general art museum going public who feel most contemporary art is “deliberately ugly”.

SL: To begin with I think that art which is deliberately ugly is fine, but art which is accidentally ugly is more of a worry. Good and bad work doesn’t correlate strongly with beautiful and ugly and that is what makes looking at and thinking about art such a rich and rewarding experience. The history of Ugly Art is as long as the history of Beautiful Art (Bosch, Breughel, El Greco, Goya?). Anyway, from at least the second half of the 20th century, art which does not rely on aesthetic appeal has enjoyed strong institutional and academic support so I don’t think there is any immediate threat from commentators, conservative or otherwise. As for the museum going public, one of my first encounters with contemporary art was in high school. I went to Germany on exchange and saw a major Beuys retrospective. I didn’t have the faintest idea what was going on. I thought it just looked like rubble but people were taking it very seriously and seemed to be getting some meaning out of it. It took years of study for me to really understand that kind of work and, having learned the language, I now find it very enjoyable. It is no surprise that people who haven’t learned the language can feel a bit excluded and perhaps hostile. To be honest, a fair amount of the pleasure does lie in being part of the small(ish) section of society that does understand. Having said all that, I see a lot of contemporary art in institutions and elsewhere that is beautiful by any standards. Even Adam Cullen has been known to make some beautiful paintings.

It seems to me that some admirers of your work miss the conceptual force behind it because of its superficial exquisiteness. Does that bother you, or do you just accept that the meaning of the work has a subjective quality for the viewer?

SL: It doesn’t worry me at all. Most of my paintings have quite small or subtle details that are sometimes very hard to find – often those details are deliberately cryptic. So I can hardly be disappointed if some people miss them. The detail and the surface are supposed to be appealing. It is a delaying mechanism – I want to make people stop and look at something carefully. The literalness of realistic painting resists interpretation (as Barthes said) so viewers might have to work a bit harder, so I try and give people a reason to look at the work a bit longer. Elements of darkness, and even ugliness are right there in the imagery so if people are responding to the paintings, they are really responding to the darker elements even if they are not thinking about the conceptual aspects of the work. I expect the meaning of the work is going to shift over time anyway – the whole profession of Art History is based on this. It is part of the appeal of art that a visual image moving from one meaning to the next over time might start to hint at some deeper, universal truths. 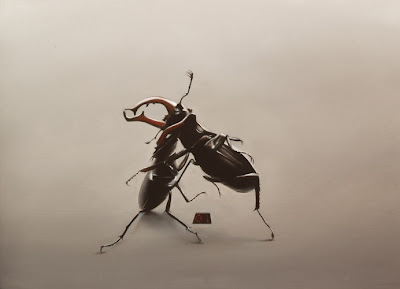 You have two major shows at your Melbourne and Sydney galleries mid-next year. When do you start the process of working for these or is your practice entirely studio-based without thought of exhibiting?

SL: Apart from the fact that the pressure of a deadline is a great way to keep the productivity up, the shows are where most people see the work. And it is my opportunity to set the context in which the works are seen. I like working alone in the studio and I love the process of painting. But even before I started making paintings my practice was focussed on the experience of the viewer. I make the paintings about things which interest me, but naturally I want to talk to other people about those things. So I make the paintings for other people to look at and I think about the exhibitions a lot.

Your works are tiny and your galleries can’t keep up with the demand for them yet there is only so much people will pay for works of that scale. Is it tempting to start working on a larger scale for financial reasons (primary dealers still seem to sell by the metre!) Have you tried to transpose the subject matter on to a larger scale?

SL: I have made a few larger paintings, when I have a subject that seems appropriate for a bigger size. It is a bit of a mental shift to change scale – it is good to do it every now and then. Finances have not been a consideration in deciding what to produce though I have toyed with the idea of setting up a Bundy Clock and charging by the number of hours spent on a work.

Thanks to Sullivan + Strumpf for permission to reprint parts of a catalogue essay written by Carrie Miller for Leach’s show Negentrophies.