Plot: Finn [Ethan Hawke] is a dreamy kid who goes for long walks on the beach and keeps a sketchbook full of faux-naif drawings of fish. Finn yearns for the emotionally unavailable Estella [Gwyneth Paltrow] who lives with her aunt in an implausibly photogenic ruined mansion complete with ocean views. One day while out boating Finn is captured by Arthur Lustig [Robert De Niro], an escaped convict who miraculously appears from beneath the waves. Fearing for his life, Finn helps Lustig escape a manhunt by giving him a boat. After the excitement and returning to his daily ritual of self flagellant mooching, Finn discovers that Estella has left for New York to pursue her dream of marrying Hank Azaria. Finn forsakes his true love and his childish obsession with art to settle down with his uncle, the aptly named Uncle Joe [Chris Cooper], for a life of fishing off the coasts of Texas. Some years later, a lawyer appears to tell Finn that a mysterious benefactor has bankrolled his dream of becoming an artist. Along with 1st class airline tickets to New York, accommodation in a delightfully bohemian hotel and all the sketchpads he’ll ever need, the benefactor has also arranged for Finn to have a “show” in a top “gallery”. Finn flies to New York the next day to begin his new life. 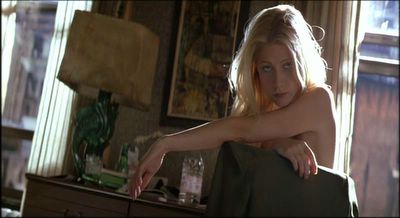 Art Life: After checking into his boho-holdout that looks a lot like the Chelsea Hotel, Finn heads uptown to meet his new art dealer, none other than Erica Thrall [played with gusto by ex-Australian ‘Little’ Nell Campbell]. With a wobbly accent that wanders between native Aussie, fake English and 30 years in New York, Erica Thrall takes Finn on a walking tour of her gallery’s latest show – some sort of installation piece that involves pregnant women sticking their bellies out of big white boxes. 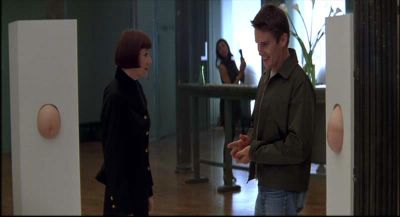 Call for you Erica!

Barking into her cell phone she yells – “No darling… no! no! no! the Picasso – yes, danke!” Finn agrees to create some paintings for a show for the Thrall Gallery and then encounters one of the film’s eerie moments of art world verisimilitude – unsmiling, black clad gallery assistants… 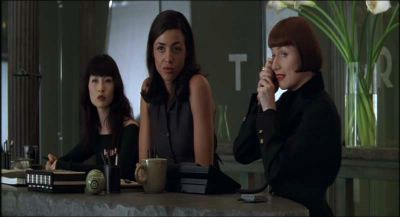 We work in a gallery.

Meeting Estelle by chance in a park while sketching some nuns, rats and assorted winos, Finn invites her to come back to his apartment for a round of heavy sketching. In another sudden and unexpected moment of believability, Estelle throws off her clothes, drapes her body over bits of furniture and grimaces while Finn – dressed in jeans and a white singlet – dashes off some drawings. A big surprise is that his adult art isn’t bad at all [a fact later confirmed when you discover the art was done by Francesco Clemente]. Finn proudly displays his drawings to Estelle when he’s finished and never a truer moment of the art life has ever been committed to film. Look what I done! 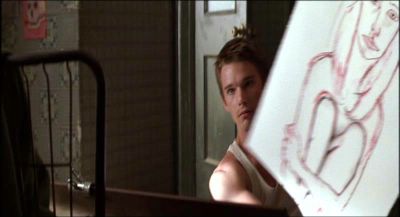 As the date for his big show approaches, Finn graduates from his seamy apartment to a full blown warehouse with views of the Hudson River, all courtesy of the mysterious benefactor. Hot art world chicks in flat shoes come around to admire his work and the incredible collection of booze bottles decorating the shelves. Thrace delivers Finn’s living allowance in big wads of cash sealed in a bulging envelope and hands over bottles of champagne. Living the art life that he’s always dreamed about, Finn goes on to the roof of his building to dance around and swig champagne, later using the left over bubbly to mix with his watercolours.

Dancing on the ceiling.

The final art world scene in Great Expectations is the big successful, sell out opening of Finn’s show at Thrace Gallery. Surrounded by hot chicks, condescending art critics, lawyers, art collectors and sycophants, the film includes one truly inspiring moment. Nervous and tongue tied, Finn is enjoying his success when who should walk in the door but Uncle Joe, his long lost fishing father figure from Texas. Mirroring uncomfortable moments at openings everywhere, Finn watches in horror as his bumpkin uncle shakes everyone’s hand, talks too loudly, drops his glass on the floor then staggers out in search of a burger. 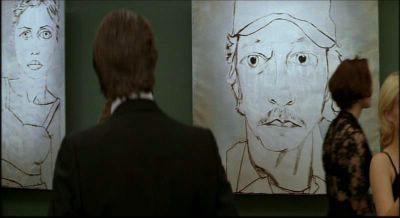 There’s a lot more to the film after that, but it doesn’t end well. Estelle goes off with the wrong man, it is then revealed that the “mysterious benefactor” was Robert De Niro all along [and who had bought out the entire Thrace Gallery show] and then Ethan Hawke went on to be in a completely pointless remake of Assault on Precinct 13. The only upside was the director Alfonso Cuaron went on to make Y tu mama tambien.