Kevin Robertson is an artist who lives in Western Australia. He dropped by to leave this comment regarding our recent 25 Predictions for The Future post:

“This is really dire. Apart for being a vacuous piece of writing, I have heard other people quote the artlifes before “drawing is the new video”, etc, etc. You are running out of ideas, guys. Well you are only middle class hypocrites/human. You deserve to be judged by your work, and for being so autocratic.”

We are certainly guilty of recycling some of our jokes, especially when they’re being presented in a new context, [such as when we gave a talk at Firstdraft’s 20th birthday and where these non-too-serious predictions were presented], but on the other hand, the comedy rule is that when you tell a joke it gets funnier the more you repeat it, then it’s unfunny for awhile, but eventually becomes incredibly funny. We’re on the upswing here Kevin, so please stick with us. But this accusation of being ‘autocratic’ troubled us, so we decided to look up the exact meaning of the word:

“Offensively self-assured or given to exercising usually unwarranted power; “an autocratic person”; “autocratic behavior”; “a bossy way of ordering others around”; “a rather aggressive and dominating character”; “managed the employees in an aloof magisterial way”; “a swaggering peremptory manner” authoritarian: characteristic of an absolute ruler or absolute rule; having absolute sovereignty; “an authoritarian regime”; “autocratic government”; “despotic rulers”; “a dictatorial rule that lasted for the duration of the war”; “a tyrannical government’” [ Wordnet]

It might be time to just state for the record that we do not recognise the legitimacy of the International Court of Justice, the right of anyone to pass judgment on our past or present activities, the puppets of the invaders or anyone else from “the west” who has led this invasion of our lands, etc, etc. [It’s not much of a defence, but it may be the only one left to us]. 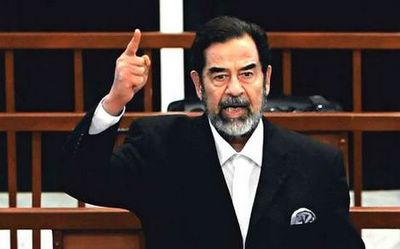 It’s always gladdening to see that even when someone is damning your efforts, they’re also holding out an olive branch in the form of a URL to their own web site. When we wrote that we didn’t like Dr. Daniel Mudie Cunningham’s show at MOP we figured we’d lost a potential friend but now his web site graces our list after he sent us an email requesting to be added. [We’re incredibly happy to link to a site that features pictures of a man with cheekbones so sharp and pronounced that tears would surely collect under his eyes like glistening pools where one might see one’s own reflection] In a similar spirit of good natured self promotion, as Kevin Robertson damns us all to hell, he’s left us his web site featuring some lovely work which has been described by Robert Cook as “plotless”. Hoorah! If you’re an artist-critic-curator – or you just you have a web site that you’d like us to link to – just send us an email and we’ll include it on the list.

A few weeks ago we decided to lift our moratorium on reading newspaper art critics. We had somehow strayed back to reading the odd column by The Esteemed Critic and soon we were back on the horse full time. Last Saturday’s column by John McDonald in Spectrum was a completely inoffensive recounting of his recent junket to Singapore. Sponsored by the Singaporean Government’s National Arts Council, McDonald’s trip to take a gander at their first Biennale produced a piece of writing so even and carefully worded that, faster than you could say ‘Sarah Lee’ we’d drifted off into a long, peaceful sleep. No change there. Upon waking we decided to take a look at what Sebastian Smee was up to. You have to wonder what’s going on over at The Australian, completely obsessed as they are with overturning the rule of postmodernism and the oxymoronically demonized spectre of “theory” in the arts. The battle lines rage across education, point and counter point being blasted out with little actual explanation of what the conservative side of the argument is. Smee is their ideological art warrior, leading the charge for conservative values in the visual arts, talking up the legendary status of deeply mediocre modernists like Lucien Freud while writing off the efforts of young Australian artists without even bothering to mount an argument.

Smee’s typical m.o. is to alternate between two modes of writing; hectic, breathless celebrations of greatness or dismissive, trite and misguided pieces on subjects about which he knows very little. Both approaches are usually held up by the ponderous scaffolding of “think pieces”. Here he is from last Saturday in a review of Goddess at the Art Gallery of NSW:

“BREASTS of unimpeachable heft and bounce, bloody garlands of severed heads, a menagerie of wild animals and images of mesmerising spiritual intensity combine to make Goddess, the new show at the Art Gallery of NSW, the greatest exhibition mounted in Australia this year. An exploration of the roles of goddesses in Hindu and Buddhist art, it is one of those rare, transforming shows that should not only excite the public but, with any luck, set ablaze the imaginations and ambitions of local artists and curators, too.”

What do you suppose the editors thought when they came across the word “greatest” in this context? Can you think of the top ten “greatest” shows you’ve seen this year? Or did he just mean ‘best’ shows? And ladies, are your breasts unimpeachably hefty? Storm in a D cup warning! This is just Smee on autopilot throwing out meaningless adjectives as is his want. Nothing to get terribly excited about and nothing really to dissuade you of the view that it’s business at usual at Review. Smee’s recent review of For Matthew And Others: Journeys with Schizophrenia staged at the Ivan Dougherty Gallery and the Campbelltown Arts Centre, is a fabulous example of a critic betraying their prejudices. The review began like this:

“In Australia we have recently developed a strange mania for trying to use art to solve social problems. Why this is, I can’t say. Perhaps, wanting to believe in art but being surrounded by relatively little in the way of true greatness (we have no Louvre, no Prado, no Metropolitan Museum) we are eager to find other purposes for it. Or perhaps, when it comes to social and political issues, we are just naive.

Aboriginal art is the classic example of good intentions being funneled through art towards a higher social and political purpose. But you find the principle at work elsewhere, too. Whenever rips in the Australian social fabric start to show, people look to art – in the form of exhibitions, festivals and so on – to provide a solution. Something like this has happened in the sphere of multiculturalism. And it is happening again in mental health.

As with Aboriginal issues, government policy in mental health has been botched so badly and for so long that it may be no surprise to find people looking outside the political arena for a miracle cure. But why, time and again, art should get the guernsey is beyond me.”

Perhaps Australian’s are naïve – after all, we keep buying the same old newspapers day after day – and perhaps, just perhaps, if we had access to masterpieces by Europeans we’d come to realise that our crazy notion of wanting art to be socially engaged is just foolish. But hang on a second, wasn’t Pablo Picasso’s Guernica, perhaps one of the best known socially engaged works of art ever made, actually in the Prado? So would this not mean then that local, grass roots engagement with social problems in art – say, mental illness – be just as relevant here as it is anywhere else? And could we seriously argue that this “mania” for “turning to art” to “solve” problems is just Australian?

Smee recently made the claim that Tony Tuckson never painted a decent picture in his life. What’s happening over at The Australian is that Smee is getting high on his own supply which, as Tony Montana warned, leads ultimately to self destruction [and having your fortress of critical solitude invaded by gun toting drug dealers]. Freebasing opinions like these suggest the true autocratic ruler of this land resides elsewhere.