We arrive in Melbourne and stay with my parents in Sunshine. I pick up Mum’s Sun Herald and read that gangs of criminal foreigners are planning on invading Melbourne to wreak havoc during the Cup carnival. These foreigners are so sneaky and clever they are going to land in other cities, like Sydney, and drive down to Melbourne to avoid police detection. Of course several refugee boats are at the same time being re-directed back to Indonesia. Maybe the two stories are related? We decide to escape the ‘foreign criminals’ and Christina, Oscar (our eight year old son) and I head to the sun on the Gold Coast where we go to Sea World, Movie World and then Dream World before heading back to the Art World. Our flight to Sydney is as bumpy and nearly as exciting as the Lethal Weapon ride. After stopping at Luna Park (where Oscar and I are turned upside down on the vomit inducing spinning thing and we get stuck to the wall of the Rotor as the floor drops away) we head off for Circular Quay. An enormous cruise ship named Amsterdam from Rotterdam blots out the Museum of Contemporary Art as we maneuver towards the quay. The Netherlands seem far away, yet only two years ago I was there in Den Haag as the artist Jon Campbell cheekily asked Queen Beatrix to unfurl his ‘Yeah’ flag. This same logo now adorns the large advertising hoarding outside the MCA announcing the exhibition Making it New an exhibition curated by Glenn “Gnarls” Barkley. Campbell’s ‘Yeah’ flag also flutters outside the building in its distinctive green and pink colors, looking like a cross between a Rolling Stones poster and a Beatles’ lyric. I try to think of other text based flags and can only think of when my Sunshine cricket team won the Under 16 cricket flag. We were awarded a pennant.

Barkley’s survey of Australian art has a healthy eclecticism and a slightly eccentric look with the hang being not dissimilar to a chaotic bazaar. It is obvious that Barkley has taken time to visit artist’s studios and exhibitions across Australia in what for the Australian curatorial set is not necessarily common practice. However my initial observations are challenged somewhat when I realize that of the 18 artists thirteen of them have some sort of text embedded in their work even if it is hidden. Maybe there is a thread through this after all.

Those who don’t have text are generally separated out into individual rooms. They are Ken Whisson, Neal Taylor, Toni Warburton, Tom Moore and Ken Thaiday Snr. However individual works sometimes escape the segregation and can suggest text, even when none is present. For example Bob Jenyn’s battleship is squared up against a wall right next to two Ken Whisson paintings of military personnel and hardware. It’s hard not to think of the word ‘WAR’ when confronted with this juxtaposition. 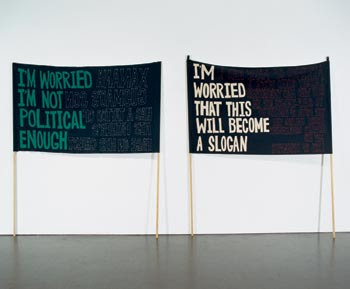 The other thirteen artists all use printed/painted slogans or packaging material somewhere in their work. For example Marrnyula Mununggurr’s repetitive ‘If you love me’ might be met with Campbell’s enthusiastic riposte of ‘Yeah, yeah, and yeah’. Raquel Ormella’s ‘Am I political enough’ or ‘am I radical enough’ through to ‘I’m wondering if this says anything’ might also be answered with a disinterested yeah, yeah, yeah. Even Jenyn’s has a slogan plastered on his sculpture ‘Jesus will soon return’, oh yeah! Mathew Hunt chimes in with ‘FUCK FACE’ and ‘SHIT DID I REALLY SAY THAT OUT LOUD’ which I have to answer yeah, while Alison Alder’s polite “Sunshine instant” appeals if only to allow me to mention Sunshine again.

Neil Taylor is from Melbourne’s west, a drop punt from the Western Oval. I remember being 14 or 15 when Royce Hart was coach of the Bulldogs and addressed us under 15s. Hart walked out on the field and his words of wisdom went something like; “of the 25 of you in front of me, the odds are that one of you might make it. If its you, then you will probably have a 1 to 2 year career in VFL footy. My advice to you is work hard at school and get a good education because the odds are you will never make it at footy.” With that he turned and walked back towards the Teddy Whitten stand. Yeah, I was devastated. Taylor might have heard Hart’s advice over his back fence because he has worked hard. You can see it by the photograph of his studio in the catalogue, which looks like somebody has tried to recreate in this similar sized MCA room. However the attempt looks half-hearted. It’s a terribly unsatisfactory solution for a major sculptor of Taylor’s standing however maybe somebody will twig that Taylor’s studio in Footscray may be worth preserving. His work certainly is – but not behind glass.

Jon Campbell, another Footscray resident, uses tourist tea towels as a support. Tea towels that feature Australian road signs has ‘Underdogs’ painted on the reverse and another shouts FOOTSCRAY HALAL MEATS 100% as Ned Kelly stands defiant on the other side. The text as well as the slogan Franco Cozzo reveals the suburb where the artist works and it is not North Melbourne. It’s the same suburb where they shot Romper Stomper and by coincidence where I played cricket also at the Western oval. My abiding memory was of playing in a Colts game where Merv Hughes opened the bowling from one end and Colin Miller (who later bowled spin for Australia) bowled his medium pacers from the other (we got thrashed by Collingwood). I only mention this because another Campbell painting reads ‘Bowled Shane’, who did not play for Footscray, he played for St Kilda.

Strangely, having been alongside Jon Campbell in The Hague, I am reminded that he constantly has appeared at certain times in my life. For instance I was at the announcement of the Herald Sun art competition back in the 90’s where Jon won the prize. But it goes back further still for it occurs to me that the very first exhibition opening I ever attended was Jon Campbell’s exhibition at the Victorian College of the Arts in 1985. The work at the MCA Insufficient Funds refers to recent funding troubles at the VCA. Campbell was a classic St Kilda art student, he wore hip clothes, was in a band and had just won the Murdoch traveling scholarship – he was the Warney of the student art world and the VCA was the hippest school in town. I desperately wanted to go, however I didn’t pass the interview. I remember finding out years later that the artist Gareth Samson who chaired my interviewing panel was a keen cricketer and like me bowled a mixture of leg spin and googlies. He was also from out west having played for Essendon. If only I had known that then I might have talked cricket in the interview, which at the time I knew something about instead of art, which at 17 I knew nothing of.

I apologize for my cricketing and art school digressions as I come across Linda Marrinon’s painting Sorry! (1982). A word that for most of the past decade has been unutterable in Australia until Kenny from South Park (K. Rudd) unseated Kenny from over near Luna Park (J. Howard). However I’m not sure it relates to the political apology given to the stolen generation of Aboriginal children. Even if it doesn’t, I love this painting for its sheer politeness (I knew a psychologist who as an experiment deliberately knocked into people on the tube in London. He was amazed that a high percentage of people actually apologized to him even when he deliberately kicked them!). This work is in the MCA collection which may be there as way of offering a public apology to any African or Chinese visitors who might come across Archie Moore.

I only discover Moore’s work in the catalogue as the plane lifts off from Australia. It did not strike me as particularly interesting as I traversed the exhibition however that is because I didn’t ‘see it’. Upon reading about Moore’s work it seems the most removed from Footscray or Sunshine, from the Western Oval, the VCA, Luna Park, Shane Warne, Ned Kelly, the Herald Sun and even Jon Campbell as well as those nasty foreign criminals at the Melbourne Cup. Moore’s work demands something more from the viewer. To see it properly one need’s to stand in front of it, point your toes inwards and bounce up and down.

Whilst reading about how I should have approached this simple piece of op art, I am as dumbfounded as the time I was bowled by a ‘Chinaman’, when the words ‘MASSAI MONKEY MAN’ appear from inside the abstract black and white circles of the reproduction. It made me think again of my psychologist friend, I’ve just been kicked and I feel like apologizing! No, no, no I think before I realize that these works are brilliant in their hidden text and contorted logic.

To be done by a wrong’un in a contemporary art space is unusual, to get it a day later at 35,000 feet even more remarkable and I can only smile at the beautiful delivery. I try, unsuccessfully, to untangle these risky and complicated works that along with the others made this exhibition well worth seeing. Bowled Archie! Bowled Barkley!