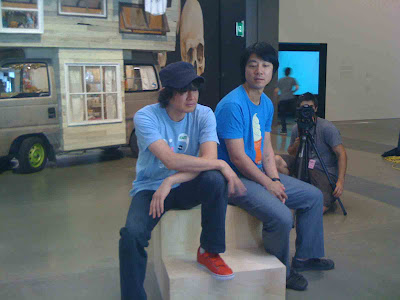 Nara [Yoshitomo] and Hideki [Toyoshima] of GRAF are YNG. They both wear sky blue t-shirts and blue jeans. They are TEAM. Nara wears vintage red trainers and a Revolver period Beatles cap, Hideki wears black trainers but no cap. They both speak English perfectly but prefer to answer questions in Japanese. Happily GOMA has a translator on staff, and soon a very nice young woman named Shioko arrives and does a fantastic job. Everyone nods and smiles. Question: “Nara – the Ramones are a constant reference point in your work – what is it about them that is important to you?” Answer: “Ha ha! I was in high school when they released their first album. I am very old. I am 50. Perhaps like you?” Question: “What is the purpose of putting a studio on the back of the van?” Answer: “There is no purpose.”

It used to be that we could easily tell who was a member of the art world. There was a dress code – especially in Brisbane. Men wore jeans and western shirts, or perhaps a suit with pointy shoes and a thin tie. Women wore flat shoes and brightly coloured sleeveless tops with matching skirts. Many people seemed to wear cool eye glasses. Nowadays it’s hard to tell who is who – everybody wears more or less the same thing and the proliferation of facial hair – beards for men [and even for some women] – has cruelled what was a very easy game.

Dan from DAMP [Melbourne] sports a Hawaiian shirt and suit, wears a hat and has a very neatly trimmed beard. Nat [formerly of Nat & Ali and now in DAMP again after many years away] wears a gold top with a tiger owl on it and says she wants to look like someone famous. Kylie looks like your classic image of an artist from Brisbane, but she too is from Melbourne. Damn you! At the top of their plinth we discuss what their project is – is it making a place for people to meet, or is the tower the work? Or is it the whole process? DAMP are masters of the evasive answer – they give very good interview. We ask if they have ever been on TV before – has Sunday Arts come knocking? It seems they haven’t and so we commend their skill at answering questions they wish had been asked. It’s like interviewing politicians. We ask a blunt question – is DAMP a cult? Hmmm. Maybe.

Friday is Media Launch Day and that means lots of people flying in from interstate to look at art and enjoy GOMA’s incredible offering of finger food. Our last visit in 2006 was memorable mostly for the superb quality of the buffet. Freeloaders everywhere hope that one day GOMA be awarded a Michelin star or two. 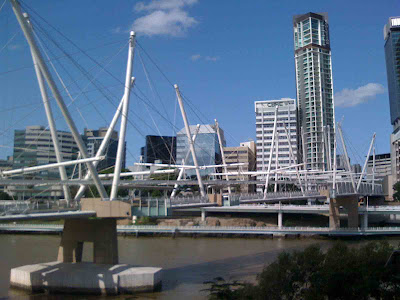 We may have been hasty in considering Brisbane a dump. That opinion was mostly based on; a) experiences in “the Valley” [a topographical impossibility since “the valley” has no appreciable hill from which to see it]; b) parts of the city [making a harsh judgment on Brisbane because of the volatile street kids you encounter in the Mall is rather like judging the whole of Sydney based on the people you see on George Street on a Sunday afternoon]; and c) the stinky weather. This view is both unkind and unfair. All of these doubts were swept aside when we got a look at the city’s incredible cycle paths built along the river. Walking back from GOMA we saw dozens of people whizzing by on handsome bikes and could only wish that we had brought the GIANT Perigees with us.