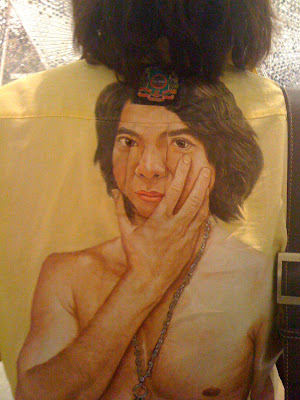 The 5th Asia Pacific Triennial opened the brand new Gallery of Modern Art in 2006. It was a stupendous event. Interstate art lovers came to witness the cutting of the red ribbon, the brass band at the entrance playing God Save The Queen and the glorious sight of men throwing their toppers into the air. Hoorah for Modern Art! Hoorah for Brisbane!

Three years later and the media day for APT6 is a much smaller affair. The speeches – while delivered by a robust line up of dignitaries – somehow doesn’t quite match the fun of last time. Tony Ellwood, boss of GOMA, makes a silky smooth speech that is, for the listener, rather like having your fur stroked by an open fire. Some dude from corporate sponsor Santos explains why they have signed up for a 5 year support deal for GOMA and mentions some things that we couldn’t quite hear – or see. It is a professional hazard of covering big art openings to have your sight line spoiled by roving camera persons looking for a groovy angle, but it’s quite another for a man in a yellow shirt to stand right in front of you and then discover that said gentleman is wearing a yellow shirt that features life-like portraits of him in the nude, semi nude and he has images of his face on his shoes. Perhaps the man from Santos said something interesting, who knows, but the bloke in the yellow shirt was looking away from us, and giving us THE FINGER AT THE SAME TIME [see picture]. Then it was the turn of Anna Bligh to officially open the APT. How quaint to visit a state where the Premier is still the same Premier as yesterday. Good lord. Bligh, who polled in Queensland as the worst premier in 30 years, still manages to deliver her speech with warmth and a low key sense of sangfroid – a rare quality in any politician. 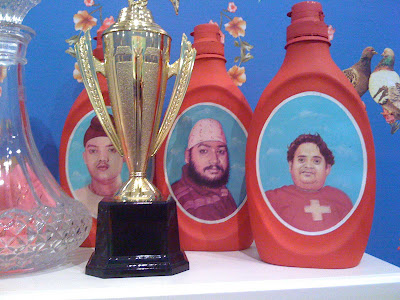 Your choice of travel reading does much to set the scene for your experience of another place. Our selection – largely an unconscious decision plucked at random from an ever-growing pile of unread books – was Ian McDonald’s 2004 novel River of Gods. It couldn’t have been a better choice. The novel imagines India in 50 years time and evokes the super-density of Asia and the street-level hyper reality of contemporary Indian street life. The region – however one wants to define it such a loose and Eurocentric notion – represents a present so wildly at odds with Western sensibilities that it’s more suggestive of a future than any science fictional possibility. The APT is like the 3D walk-in version of River of Gods. Thukral & Tagra’s installation of a wallpapered room replete with sculptures, a TV playing YouTube clips, bespoke furniture, a table tipping on its end, busts of the artists that protrude through the walls, shelves containing images of the artists painted on consumer goods, a small photo of Paris Hilton [and much much more] is almost impossible to take in as a collection of discreet objects. Rather, the whole room is an assault on the senses, partly a play on consumer culture, part a celebration of celebrity. Its lack of manners is charming at every level. 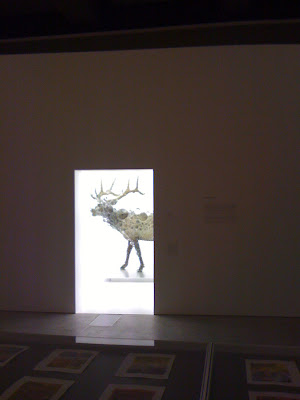 Kohei Nawa’s PixCell-Elk #2 is the work on the cover of the APT catalogue. It’s the cool binary to T&T’s hot aesthetic clutterverse. To walk into Nawa’s pristine white room and see a taxidermied elk covered in glass and crystal balls is an eerie and unsettling experience – it feels like perception itself is being subtly tweaked. It also suggests SF, but in a smoother and more familiar mode. The artist denies the SF connection saying he imagines the usual experience of SF to be more a disjunction, a shock, like when the alien bursts out of a chest. His installation is meant to be a smoother transition, Our camera is set up in the room with the artist and translator and, when we ask his views on his own work, he is like many artists we talk to at the APT – torn between the desire to create a certain experience but just as keen to avoid an overly proscriptive reading. This is the floating world of contemporary art, and there’s no use complaining about it.