There are few things more terrifying than going to an exhibition of a commercial photographer’s “personal” work. Invariably the show will be beautifully shot and immaculately presented but unfortunately it usually also means the photographs are missing something. What that ‘something’ is, we can’t really say. Sometimes the idea is too cloyingly obvious, sometimes it’s all just technique, sometimes it’s just boring, but whatever it might be, we think of commercial photographers work and its relationship to art in the same way we think of Dolly The Sheep’s relationship to other sheep; very similar, but not the same. 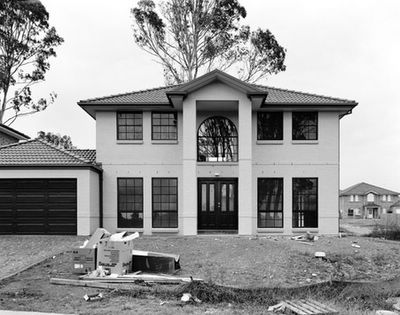 Luckily for Richard Glover, his personal work also just happens to be his commercial work, and in his case, that fits brilliantly. Glover’s work as a photographer of architecture has ranged from monumental projects such as his series covering the construction of the Tate Gallery from industrial ruin to industrial art palace, to a multitude of gleaming architectural constructions around the world. Recalling the great Australian artist photographers such as Max Dupain, David Moore and Grant Mudford, Glover’s work is a cool, distanced, minimal and highly aestheticised recordings of modernist and post modernist constructions.

It’s hard to think of a label for the houses of Sydney’s outer suburbs where new housing subdivisions sit above the grey soil like prefab sculptures. Glover is showing two new series of works at The Tin Sheds Gallery, Kellyville and New Suburbs.

The Kellyville series, in a deathly black and white, records the completed streets of a new subdivision and its houses forlornly awaiting owners. The houses are a hybrid form of colloquial architecture, a little bit of everything melded together into a form that’s meant to evoke ‘homeliness’ but could just as well be the setting for Dawn of The Dead. New Suburbs is an undefined location of a slightly older houses with gardens, lawns and parked cars, but are also absent of people and devoid of visible life. Although taken in Sydney, these images could come just as easily from that stretch of no mans land south of Perth, or in the subdivisions behind Byron Bay or the back blocks of Springfield on the NSW Central Coast.

Glover’s pictures do two things very well. Firstly, they record these places without resorting to a moral position. Other recent contemporary Australian photographers have been this way but could not resist passing comment on place where they do not live. It may not be for everyone, but it’s home for someone. Glover’s images are also for the coming generation who want to look back on these venerable architectural masterpieces and wonder what they looked like when they were just built. Some may look upon these places as ghastly disaster zones of Ballardian sublimation, but for others, and perhaps the cognoscenti of the mid 2050s who will vie for these design classics in the walled cities of tomorrow – Glover’s art is a masterful contemporary landscape art.

Poll Shock: Emerging To Mean Whatever