Greetings from the sunshine state. The first thing you see out the window of the aircraft as it descends into Brisbane are mud flats. This isn’t meant to be symbolic, it’s just the way it is. In a similar fashion outside the Gallery of Modern Art is a permanently-sited sculpture by Scott Redford, a big bit of glitzy neon vintage Gold Coast signage that promises NO ABSTRACTIONS. It’s an empty promise of course, but it is appealing.

GOMA is a beautifully presented gallery with absolute water frontage, stunning city views, light filled galleries – many with ensuite bathrooms – and it’s only a minutes’ walk to nearby cafes, restaurants and Brisbane’s busy CBD. Two doors down is the heritage-listed Queensland Art Gallery, a definite fixer-upper with huge potential that would suit either young families or perhaps couples looking for a challenge. Both contain art. All of GOMA has been given over to the 6th Asia Pacific Triennial, with small portions of QAG [piano bar, water court, adjacent galleries] similarly dedicated. 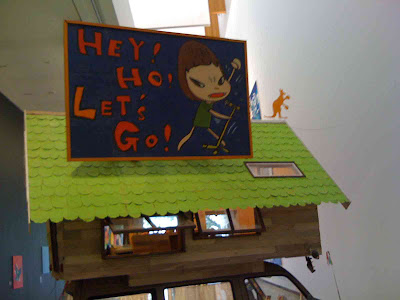 We’re on a preview walk-through to see the highlights. And they are very highlighty. Shirana Shahbazi’s gi-normous painting/photographs line the walls of GOMA’s Long Gallery and they overlook Yoshitomo Nara’s tiny mobile studio, the collaboration between the Japanese painter better known for his knife-wielding little girls and the Osaka architects GRAF. Together they took a Nissan campervan and stuck a wooden house on the back. On the top is one of Nara’s little girls holding a mic and yelling HEY HO LET’S GO! The immediate reaction on seeing this is to grab our imaginary air guitars and – heads down – crank out the first few bars of Blitzkrieg Bop.

GOMA’s galleries are filled with sounds of getting ready – hammers, saws, the beep-beeps of slowly reversing orange trucks. Among all the activity we see the work of numerous brand name artists whose work looks fabulous, albeit missing wall texts and bearing WET PAINT signage. At the end of the main gallery is the second biggest plinth we have ever seen. It appears to be made of marble and stands some 150 meters high. As you get close you discover it’s a sham. Inside, the edifice turns out to be hollow and full of detritus from the 15 year career of Melbourne art group DAMP. It looks like a club house inside, with crappy share-house furniture, a kettle and many mugs, t-shirts, to-do lists and assorted junk arranged just so. The idea is that you climb up to the top of the plinth via an interior stair case and once at the top, have a conversation. About what? 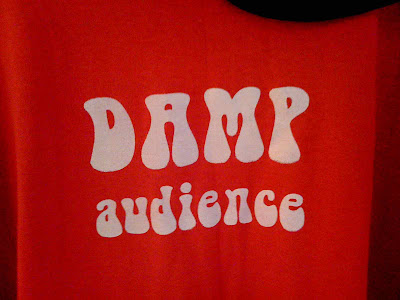 TEAM Art Life are in Brisbane to make a TV show. The program will be another in our series of shows where we stand around pretending to look, and then sometimes get caught in the act of actual looking, and then we talk to people about their art and what they think will happen when people look at it. The Art Life at The APT will screen on ABC1 in early February 2010. Later today, we’re meeting DAMP and then the curatorial manager of the APT Suhanya Raffel, then on to Mr Nara and Graf, and then we will go outside lie in the long grass and listen to the gentle sounds of Pacific Reggae.