Movie of The Week: Basquiat

Of all the Hollywood movies about artists perhaps one of the best known of the last decade is Julian Schnabel’s affectionate 1996 biopic of his friend Jean-Michel Basquiat. The movie is great example of the ‘troubled genius’ approach to making a film about an artist’s life, but Basquiat succeeds where so many other films have failed because Schnabel brings his own first-hand knowledge of the New York art scene of the period to the movie. The director’s conflicted attitude to his subject is evident in every scene – on the one hand Schnabel plays the movie for tragedy, yet on the other, the film has a level of ironic detachment that is rare, perhaps acknowledging that without the whole concept of ‘troubled genius’ there would be no artists such as the precocious Basquiat reaching for greatness. 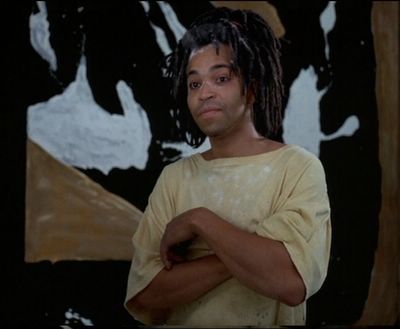 Schnabel is no stranger to self-aggrandisement, casting Gary Oldman as his alter-ego ,the fictional artist Albert Milo next to Dennis Hopper’s portrayal of real life German collector/dealer Bruno Bischofberger and David Bowie’s cartoon version of Andy Warhol. Alternative Hollywood star Parker Posey plays Mary Boone, Paul Bartel is bald enough to be Henry Geldzahler and Vincent Gallo makes a mannered cameo as “himself”. Among this cavalcade of 80s NYC glitterati, the superb Geoffrey Wright shuffles through the East Village in Basquiat’s clogs, a paint spattered saint of the new era. Schnabel creates some visually spectacular moments which capture the spirit of the time if not the exact historical fact – Basquiat at one point, deep into his heroin addiction, looks above the tenements to the sky and sees a giant breaking wave complete with surfers accompanied by PIL’s Public Image pounding on the soundtrack. 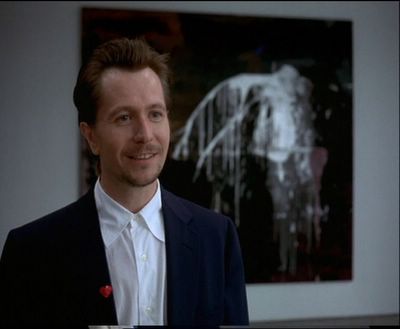 One of our favourite scenes from Basquiat is not one the grand moments of the art world recreated for the screen, but an almost throwaway moment early in the movie which explains that Basquiat will not be taking the long route to art stardom. Working as an electrician’s helper in Mary Boone’s downtown gallery, Basquiat meets a character known as The Electrician. Portrayed by Willem Dafoe, the character represents every artist who never quite made it into the big time, existing on the periphery of the commercial galleries putting up lights, painting walls and speculating on what might have been. The scene begins with The Electrcian asking Basquiat for a Philip’s Head screwdriver. As Basquiat hopelessly pokes around in a tool kit, the successful, dapper Milo arrives at the gallery to approve the installation of his new paintings. Basquiat and The Electrician look on… 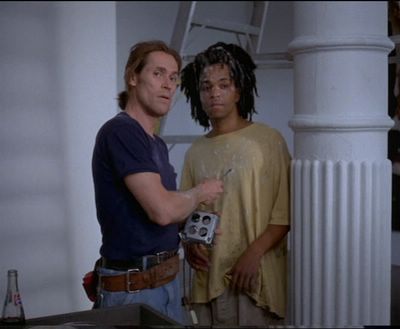 Always have something to fall back on.

The Electrician: [sighs] You’ll get there, you’ll get there. It’s good to have something to fall back on. That’s why I became an electrician… pays the rent. [long pause] You know, I’m an artist too.

The Electrician: Oh sure, I sculpt. I’m just really finding myself now… What are you, 20? [Basquiat laughs] You’re just like I was. I’m going to be 40 in July and you know, man, I’m glad I never got any recognition. It’s given me time to develop.

Basquiat looks for a long moment at the Electrician, sighs and walks over to Milo, introduces himself and then walks out of the gallery, destined for immortality.

See you on the flip side