The best Zen stories are the ones that end with a trainee monk asking his master how he will achieve enlightenment. The master thinks about it for a moment then hits the trainee over the head with his walking stick. It’s a kind of slapstick enlightenment, a quick shortcut that’s much faster than spending years fixing motorbikes or searching for a gateless gate. Traditional Buddhist enlightenment takes years of effortless effort, not thinking about it, letting the idea sit there in the back of your mind while trying to feel compassion for all the bums who have crossed you. At the end of it all there’s no guarantee you’ll go to the grave any wiser or smarter than when you first entered this wretched world… and you come back next time as a flea.

Looking at Lindy Lee’s latest exhibition Dark Star at Roslyn Oxley Gallery is like checking off a list of well known themes – orange and green, black, faces, hands, photocopies on canvas boards. At some point in the last decade Lee started using paint and ink splatters that enlivened what had become a very smooth and frictionless visual field. All these things are back again. It’s an odd sensation looking at this work, so utterly unconcerned as it is with grand and sweeping changes, big expressive moments or any deviation from this personal catalogue of effects. 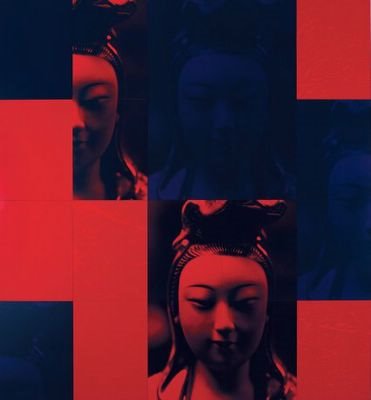 Our relationship with Lee’s work stretches back to her 1985 show Black Is Not As Black As All That. Throughout the 1980s and into the 90s Lee slowly accumulated her visual style while straying away from the orthodox post modernist framing her work had received at the outset. Lee had begun with appropriations of art historical images building up layers of black paint and wax that was scraped and carved away to reveal the images beneath. Today’s work, now concerned with the mysteries of Zen, have a direct lineage to the old works in terms of their materials but are light years from the secular concerns of post modernist theories.

The paintings in Dark Star are a calmative for troubled souls. It is undeniable that when you look at her work your heart rate slows and you feel a little drowsy. Perhaps it’s a lack of oxygen, or maybe it’s the religiosity of the pieces working their effect, but we feel soft and fluffy, rather like a cloud. The catalogue notes point out that nothing here is left to chance – everything used has a connection in one way or another to everything else Lee has done. We happened to hear the artist being interviewed on Radio National last week. Listening to her talk about her process you got the sense that the paintings come from a place that is far more casual than you would guess from looking at the work. The key painting in the show is the title piece Dark Star – unfortunately not named for the space truckin’ anthem by The Grateful Dead. This darkness is “a quality that has had a strong presence throughout the artist’s thirty year career” and “the Dark – in relation to Zen- becomes a poetic kind of concept that includes the notion of liberation from illusions, as in ‘The Dark of not knowing’ – ‘The Dark of Absolute Freedom’”. The painting is a huge black/blue field with a large dynamic splat of wax across the middle, perhaps accumulated over years from candles, or maybe thrown there from a bucket. This is possibly the dark of not knowing, but we don’t know for sure.

The attraction of limiting one’s options is the possibility of finding something essential, something completely outside the meaningless shifts of fashions, trends and weightless affect. Orange in some Buddhist religions represents humility. Lee uses images of faces and hands, some sourced from statuary others from what appear to be Eastern and Western art. Each hand is poised in a gesture of beatitude, the faces lost in transcendental reverie. For an outsider to this enclosed process, one can appreciate its sincerity but with the absence of just the odd new thing, just a little morsel for people like us addicted to ephemera, it’s hard yakka. 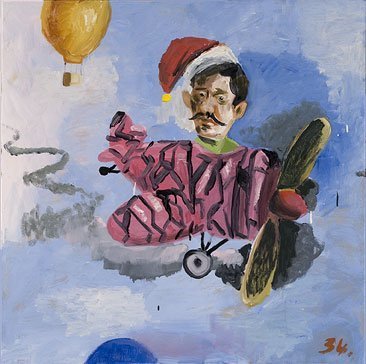 McLean Edwards, like Lee, is an artist with a very particular and personal set of idiosyncratic visual motifs. When we joked recently that he had painted himself into his portrait of Cate Blanchett hung in the Archibald, it was done with the full knowledge that for once he hadn’t; it was Mr. Cate who looks a hell of a lot like one of Edward’s squash-faced characters. In years past, Edwards has painted himself into virtually everything he has done with much the same approach – flat on perspective, squashed space, dark backgrounds and a piling up of figures, one on top of the other, peeking out from behind a head, monsters of the Id taking a bow for the viewer. This cavalcade of painterly effects and characters has become so well known that some artists have recently taken to emulating the look of Edwards’s work without really understanding its substance. We have lost track of the number of times people have dismissed his work because it apparently looks vaguely like Susan Norrie’s paintings from 15 years ago. This is not actually true, there being only a passing resemblance in some of Edward’s characters to some that Norrie used, but we’re pretty certain Edwards never painted Mickey Mouse, preferring instead a painfully elongated Tin Tin. David Bromley works in a vaguely related field of Boys Own characters but Edwards leaves the copyists for dead when it comes to actually putting paint on canvas.

Edwards is a contemporary artist, not the traditionalist he’s often pegged as. Sure, there are some odd art historical shadows like Rembrandt and William Dobell which diverts the young fogeys from the bold and bizarre choices Edwards makes. It was said in regard to his Blanchett portrait that the composition was “awkward” and indeed the shapes and weights of the figures felt oddly unresolved, but, as it seems so difficult for some critics to understand, this too was the artist’s choice, not an accident. So when you see in this latest show Non-Fiction at Martin Browne Fine Art, Edwards using pink and blue and yellow and jazzy black lines holding the flat forms together, it’s because the artist has been looking at contemporary painting – the big bad world of bad art made by people alive now, not some fusty dusty assumed world of artistic rightness. 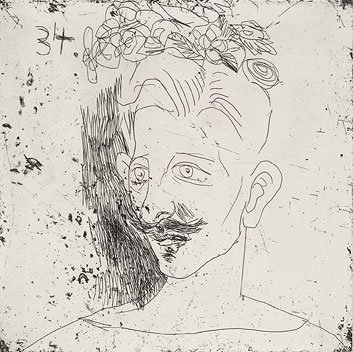 The latest show on first impression appears to be more of the same – figures standing, their baleful faces looking at the viewer, some alter egos [cats, elephants, giraffes] and the odd flying machine. He paints them well. But this show is a step into something new, one of those occasional breakthroughs that keeps everyone interested. The title is a complete untruth, these images are entirely fictional and Edwards appears to have invented a new character, a cheesy Rugger Bugger bloke from the 1920s complete with a fake moustache and jolly flying scarf. In a series of six images, the bloke is engaged in a dog fight with another bi-plane, a pink monster flown by Edwards’s avatar. With the sudden and unexpected arrival of perspective comes the most successful backgrounds the artist has painted in years. Section them off and they’re a sublime mess entirely deserving of their own space. The comedy of these images is that the ‘character’ is Edwards fighting himself, perhaps acknowledging that ultimately the fighter only ever fights himself.

Other works in the show are crowd pleasers – CB as A Man, Women Drivers and the splendidly titled Savage Garden for example – and are all fine paintings. Indeed it’s in the painting, a causal, almost effortless, shall we say Zen-like application of paint, is where this show really comes into its own. It’s good to be reminded once in a while that images on canvas are just blocks of paint hung together through a deft touch and mutual wish fulfillment. Here Edwards subverts the whole deal in a Cullen-esque outlining of the shapes with cursory lines. It works brilliantly. Also of note for Non-Fiction are the first drawings and etchings the artist has shown. Edwards seems to be one of those artists who can never really finish anything, always worrying over the end point. Somehow, miraculously, these drawings have been wrestled away from him and at their best echo the simplicity of line of Picasso. Yep, it’s kind of mad. We can’t begin to imagine how he ever got around to doing etchings.

One Hundred and Two paintings for Mum and Dad