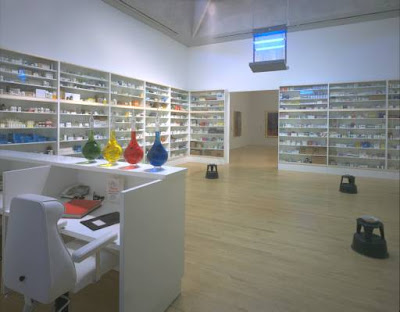 “Adrian Dannatt: Pharmacy, which was shown at the Cohen Gallery in New York in 1992, feels kind of religious. As a viewer, it’s like being inside one of the vitrine pieces.

Damien Hirst: I’ve always seen medicine cabinets as bodies, but also like a cityscape or civilization, with some sort of hierarchy within it. It’s also like a contemporary museum of the Middle Ages. In 100 years time this will look like an old apothecary. A museum of something that’s around today.

AD: In France they have glistening pharmacies meant to be the most up-to-date imaginable, but they already look dated because it’s such a ’70s idea of Modernism.

DH: They provoke an idea of confidence, of trust in minimalism. I love medical logos, so minimal, so clean, there’s something dumb about it. I like the idea of outside and inside. The cabinets could be people and the drugs internal parts, and they relate to different parts of the body.

AD: Is the theme of escape in pieces such as The Acquired Inability to Escape (1991) and The Asthmatic Escaped (1992) related to the idea of inside/outside?

DH: I like escape formally, as an idea. There’s a religious element to The Acquired Inability to Escape. The one at the Tate has four slits — if you took an imaginary line through from the camera lens you’d get a cross. That’s something you don’t see but which is an important part of it…”

Life’s Like This Then it Stops. Interview with Damien Hirst, Flash Art, 1993